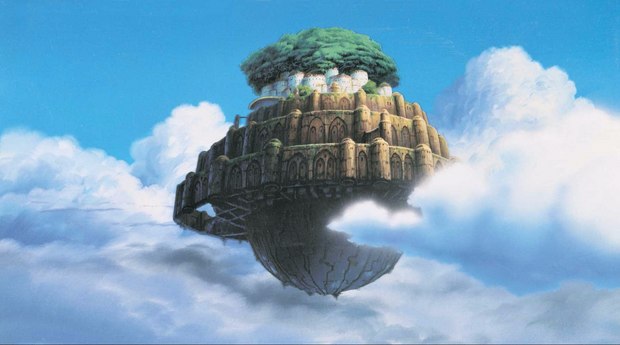 In celebration of the ongoing STUDIO GHIBLI FEST, AWN is giving away a set of free tickets to see Castle in the Sky along with some cool Ghibli-themed merch courtesy of GKIDS.

The release of Castle in the Sky continues the partnership between GKIDS and Fathom Events, which brings six masterpieces from the legendary Hayao Miyazaki and Studio Ghibli to theaters this year as part of STUDIO GHIBLI FEST.

Castle in the Sky is a rollicking adventure about a young girl with a mysterious crystal pendant who falls out of the sky and into the arms and life of young Pazu. Together they search for a floating island, the site of a long-dead civilization promising enormous wealth and power to those who can unlock its secrets. But greedy pirates, spies, and the army are also all in hot pursuit. As one of Studio Ghibli’s earliest films, and the first to be released officially under the studio’s banner, Castle in the Sky quickly established the studio’s reputation for strong heroines, unforgettable storytelling and beautiful artwork. Tickets can be purchased online at www.FathomEvents.com or at participating theater box offices. The program also includes GKIDS MINIFEST a super-fun, super-condensed festival of the best short animation from around the world. Upcoming titles include:

In addition to free tickets, the Ghibli-themed prize pack includes one set of stacking cups from KiKi’s Delivery Service, a hardcover copy of “The Art of My Neighbor Totoro,” and a snuggly No-Face plushie from Spirited Away.

To enter your chance to win the prize pack and two free tickets to see Castle in the Sky in a theater near you, email info@awn.com with the subject heading “Castle in the Sky Giveaway” with your full name and mailing address. One lucky winner (sorry folks, U.S. residents only) will be chosen at random, and will be notified via email. The deadline for entries is 5:00PM Pacific on Tuesday, August 22.