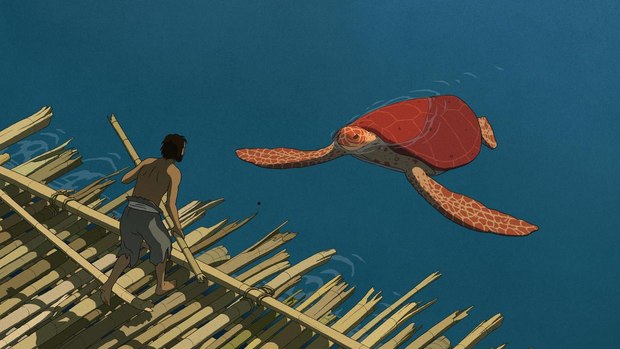 In celebration of the upcoming Blu-ray, DVD & Digital HD release of Academy Award-winning director Michael Dudok de Wit’s feature film debut, The Red Turtle, AWN has two copies of the film to give away, courtesy of Sony Pictures Home Entertainment. A stunning, wordless examination of one man’s solitary search for survival and companionship, The Red Turtle was an Academy Award nominee for Best Animated Feature, and won both the Annie Award for Best Independent Animated Film and the Un Certain Regard Prize at the 2016 Cannes Film Festival. It follows Dudok de Wit’s Academy Award-winning short, Father and Daughter (2000), and the Oscar-nominated The Monk and the Fish (1994).

Produced by Japan’s Studio Ghibli and France’s Wild Bunch in association with Why Not Productions, this masterfully animated fantasy film tells the story of a man shipwrecked at sea who becomes stranded on a beautiful but desolate island. He learns to live in isolation, seemingly tormented in his efforts to escape the island by a giant red turtle. Miraculously, soon he comes upon a young woman, also lost at sea, and they create a family together.

Arriving on Blu-ray, DVD & Digital on May 2 from Sony Pictures Home Entertainment, The Red Turtle is written by Dudok de Wit and Pascale Ferran, and produced by Isao Takahata, Valérie Schermann and Christophe Jankovic.

To enter your chance to win a free copy of The Red Turtle, email info@awn.com with the subject heading “The Red Turtle Giveaway” with your full name and mailing address and preference for Blu-ray or DVD format. One lucky winner (Sorry folks, U.S. residents only.) will be chosen at random, and will be notified via email. The deadline for entries is 5:00PM Pacific on Tuesday, May 2.