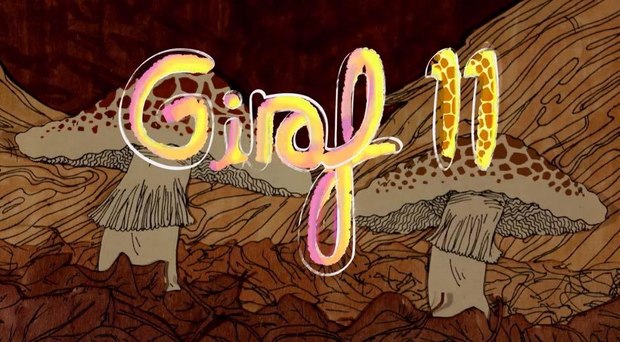 After much discussion and deliberation, the jury of the Giant Incandescent Resonating Animation Festival has announced its choices for the best short films at the festival, held on the last weekend of November in 2015. Along with the awards for best International and Canadian short films, the jury also chose to recognize three other films for their outstanding artistic merit.

Wood is an artist, with a primary focus in animation. His work might be labeled spastic, non-sequential, and distracted. Movement is everywhere. He wants to capture it, live with it, let it grow internally, and let it show externally.

Sorell is a writer and artist from Calgary, Alberta. With a special interest in relationships, art ethics, and the implications of digital media, she recently published the art-tract Do Not Go Gentle Into That Good Night And Other Bastardizations, completed her short 3D animation Hotline Chimes, and founded the critical publication The Calgary Harold. She works drawing logos for an ice cream and pastry chef, and as the Editor-in-Chief of Luma Quarterly.

Based in Calgary, Alberta, Cook is a mask and puppet maker and experimental theatre artist for over 20 years, she now includes film making in her art practice. She co-directed with Jesse Gouchey the award-winning Spirit of the Bluebird, which has screened at over 30 festivals worldwide.

The full list of GIRAF11 winners is shown below: This paint-on-glass animation impressed our jury with its sensitivity, frankness, perfectly timed (and distinctly French) humour, and constantly engaging flow. Paint on glass can be a notoriously fussy medium, but Devaux’s film was consistently surprising, beautiful and engaging. Calgary’s Chad VanGaalen takes the prize for Canadian short with his freewheeling space oddity Tarboz, thanks to its free form narrative, joyful creativity, absurdist humor, and, according to jurist Caleb Wood, the most “perfect ending to any film I’ve ever seen.” It’s all the more remarkable that Tarboz is the work of a single animator; in terms of intricacy, imagination and sheer volume of ideas, Tarboz is in a universe of its own. By every metric we could think of, Seth Boyden’s graduation film from CalArts was by far the audience’s favourite film. It’s easy to see why. The story of a rock over millions of years, An Object at Rest is neither slow nor static -- instead it’s brisk, funny, and heartfelt. It’s also a perfect example of the value of good character design, as its distinctive central character changes size and shape throughout without ever leaving the audience behind. We’ll let jurist Caleb Wood speak for this one: “An incredible reminder of how resourceful a young filmmaker can be, about how resourceful we all used to be. Jack Wedge presents a tight and straightforward narrative in a loose gnarled beautiful mess. It’s not always about point A to point B, it’s about being able to suspend the disbelief throughout. May Dog Man live strong in the hearts of all his viewers, may Jack Wedge move forth into new animated realms.” Yoriko Mizushiri was the winner of last year’s Best International Short prize at GIRAF10, and Maku continues her development as one of the most distinctive voices in contemporary animation. The film itself is difficult to reduce to written description; it is sensual in its movements, poetic in its careful choreography. Jury member Lindsay Sorell said Maku was “the only film that actually left me with my mouth open in awe at the climax,” which gets at Mizushiri’s true genius -- through seemingly simple linework and subtle pastels, her films provoke a truly tactile reaction. The story of a trickster spirit told with varied animation techniques, odd narrative and striking black-and-white imagery, Chulyen: A Crow’s Tale struck a chord as much for its odd humor as its striking visuals. Directors Cerise Lopez and Agnes Patron have an obvious love of North American folklore, which helps make the selfish, gluttonous crow into a memorable animated character.

Submissions for the 12th GIRAF festival of independent animation are now open at giraffest.ca.