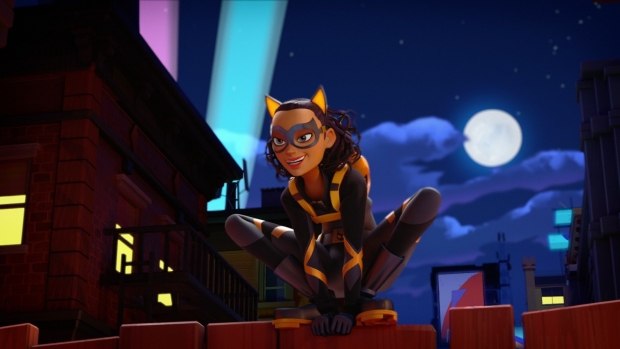 Catwoman sneaks her way onto Batwheels this month, and Cartoonito’s preschool series has just released a new clip of the stealthy Batman anti-hero, voiced by Golden Globe winner Gina Rodriguez, on the prowl in Gotham City. The upcoming episode, “Rev and Let Rev,” will premiere Monday, November 21st at 10:00 a.m. on Cartoon Network’s Cartoonito block and stream the next day on HBO Max’s Cartoonito hub.

In “Rev and Let Rev,” Catwoman tries to evade Robin and his sports car, Redbird, while attempting to get her claws on one of the shiniest trinkets in Gotham City. During the cat chase, Redbird learns that his new muffler modifications may not be the best for catching such an elusive adversary.

Check out the action!

Batwheels marks DC’s first-ever Batman preschool series. The show follows a group of young sentient super-powered vehicles as they defend Gotham City alongside Batman, Robin, and Batgirl. In addition to featuring the first onscreen portrayal of Duke Thomas, the first Black character to don the Robin “R” in the pages of DC comics, the series also introduces preschoolers to a Latina iteration of Selina Kyle as Catwoman.

According to the studio, underneath the superhero adventures, Batwheels teaches children about what it means to be a hero through its unique “Hero” curriculum. The curriculum aligns with Cartoonito’s Humancentric Learning framework that encourages kids to become the best version of themselves. Every episode demonstrates a different character strength—self-awareness, concern for others, perseverance, and courage, among others—in overcoming personal and interpersonal challenges and will model how heroes contribute to the greater good.