Based on ‘Gigantosaurus’ series airing on Disney Junior, game lets players explore a vast, prehistoric world as their favorite dino buddy from the show. 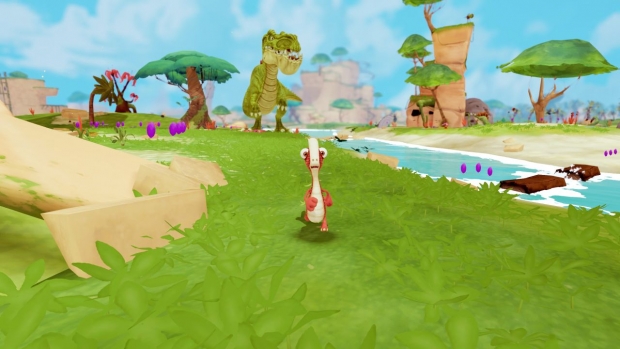 PARIS & LONDON -- Animation entertainment company Cyber Group Studios, Outright Games and Bandai Namco Entertainment Europe have announced Gigantosaurus: The Game is now available to play on Playstation 4, Nintendo Switch, Xbox One and Steam. With side by side, 1-4 player action, families can join in together on the fun.

Developed by Wildsphere Studios, Gigantosaurus: The Game is an all new adventure based on the world of the popular CGI animated show Gigantosaurus. The series is currently airing its 1st season on Disney Junior worldwide. Season 2 and 3 have been commissioned by The Walt Disney Company, France Télévisions and Super RTL. The first season will also air on Netflix and on major international networks throughout 2020.

Gigantosaurus: The Game allows players to explore and race across the vast, prehistoric world in a one-of-a-kind dinosaur adventure. Play as your favorite dino buddies from the show, Rocky, Tiny, Mazu, and Bill, as they discover secrets, solve puzzles and save the day.

Based on Jonny Duddle’s bestselling book, the series is directed by Olivier Lelardoux; it takes preschoolers on exciting comedy-filled adventures as dino heroes leave their nests and explore the big world beyond. Each episode centers around discovering the mystery of Gigantosaurus, the biggest, fiercest dinosaur of all. As the inquisitive Mazu, playful Tiny, timid Bill, and courageous Rocky aim to learn more about Gigantosaurus, they face their fears, work together and discover that they each have something to learn from him, too! “We have always been committed to creating the highest quality video games possible and ensuring they tie-in expertly to the story-world of the source material,” commented Outright Games CEO, Terry Malham. “With Gigantosaurus: The Game this process has been easier than ever as Cyber Group Studios has been able to create a title that mirrors the world of the books and TV show perfectly.”

“We have had high aspirations for this title from the beginning and wanted to ensure we captured the magic of our premier animated show,” remarked Cypber Group Studio VP, Thierry Braille and COO, Dominique Bourse. “Working with Outright Games has allowed us to create something truly special that the whole family can enjoy together at home. With the launch of our first ever video game we now have the opportunity for a brand-new audience to experience the world of Gigantosaurus for the first time ever.”