Get Slimed with Nick and The LA Country Natural History Museum

‘Science of Slime’ series teach kids and their families about the slimiest of animals with help from popular Nickelodeon characters; fun educational videos, DIY activities, and weekly live program runs now through December 14. 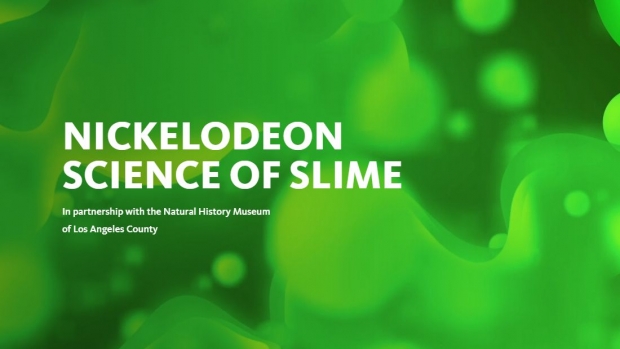 LOS ANGELES -- The Natural History Museum of Los Angeles County (NHM) is partnering with Nickelodeon to explore the “Science of Slime” with experts and educators showcasing the many ways plants, animals, and other organisms use slime to survive. With the help of popular Nickelodeon characters and Ryan Alessi from Nick’s All That, kids and families can get to know some of the world's slimiest species—from frogs to fish to snails—through fun and educational videos, DIY activities, and weekly live programs with NHM scientists at NHM.org/slime.

“We are always looking for innovative ways to showcase how fun scientific work and discovery can be, and to make our research and collections accessible and engaging for the widest possible audience,” commented Dr. Lori Bettison-Varga, President and Director of the Natural History Museums of Los Angeles County. “We are grateful to Nickelodeon for this partnership and for inspiring young people to see some of their favorite programs and the world around them in a new light. With the videos, events, and activities, we hope to provide encouragement and tips for how to pursue careers in science and natural history and show what it’s like to work at a science-focused museum.”

The new custom “Science of Slime” webpage will feature kid-friendly information and allow online visitors to access “Science of Slime” content and downloadable activities in one place. All content will be available in English and Spanish. NHM’s gallery interpreters and scientists collaborated on a slime-inspired virtual tour that will take viewers on a journey through NHM halls and behind-the-scenes into their collections. Hosted by Ryan Alessi from Nickelodeon’s All That, the video will offer a new perspective on the specimens on display and cared for in the collections, providing access to many items rarely seen by the public. DIY activities developed by NHM’s 2020 Marine Science Interns will help audiences continue their at-home exploration with simple step-by-step activities and projects designed for family audiences that feature popular Nickelodeon characters from SpongeBob Squarepants and paired with fun, informational videos also created by the interns.

"NHMLAC is the ideal partner for a scientific exploration of Nickelodeon’s slime and in helping to make science fun and accessible to kids,” remarked Andrew Machles, Vice President of Public Affairs at Nickelodeon’s parent company Viacom. “We have collaborated with the museum’s experts to create content that we hope will inspire more kids to connect with nature and pursue an interest in scientific careers.”

Nickelodeon has produced six videos featuring scientists from NHM’s Research and Collections department, along with a virtual slime-related tour of the museum led by Alessi. Edited with clips from Nickelodeon programs that add levity and help show the science reflected in Nick’s approach to television, these videos will enable viewers to learn about each scientist’s role at the Museum, what slimy species they study, and help them discover mind-blowing facts about the ways slime functions in nature. For example, a video with Regina Wetzer, PhD., Director, Marine Biodiversity Center and Dean Pentcheff, Project Coordinator, Diversity Initiative for the Southern California Ocean, will introduce viewers to a glass rope sponge in the Museum’s collection that is a very distantly related cousin to SpongeBob, paired with snippets from SpongeBob that illustrate the scientists’ fun facts about how some sponges make a skeleton by secreting glass. Viewers will also be introduced to the pet snake Audubon of Greg Pauly, Ph.D., Curator, Herpetology and the crocheted sea slugs of Jann Vendetti, Ph.D., Associate Curator, Malacology studies as these scientists show off key species found at the Museum.

Each Monday and Thursday through December 14 (except on Thanksgiving), NHM’s education team and live animal program will host assembly-style webinars that enable students and teachers to participate from their virtual classroom. The sessions will allow participants to meet a scientist or a live animal and will allow them to submit their own questions to be answered.

Meet Leslie Harris: Weird worms and pretty polychaetes - Harris has worked with the Museum’s polychaete collection since 1988. With more than 16,000 described species, these segmented worms come in an amazing array of body forms and sizes. Learn about the many ways they use slime to survive!

Meet Dean Pentcheff and Regina Wetzer: Floating forests and amazing algae - NHM’s marine biodiversity experts are teaming up to talk about all things algae! Discover how giant kelp creates incredible ocean communities for various organisms and what slimy secrets are contained within these dense floating forests.

Meet Jann Vendetti: Snail trails and mollusc mucus - Join NHM’s Associate Curator of Malacology (and resident snail specialist) for a glimpse into the wonderful world of molluscs! From our gardens to the sea, learn how this extremely diverse group of organisms has adapted its use of slime for different environments.

Meet Greg Pauly: Slimy skin and sticky salamanders – NHMLAC’s Curator of Herpetology and Co-director of the Urban Nature Research Center, studies the natural history, evolution, and conservation of reptiles and amphibians out in the wild and within neighborhoods just like yours! Learn how some of these fascinating creatures use their slimy and sticky skin for protection against predators.

The partnership between Nickelodeon and NHM grew out of a 2019 collaboration for the Museum’s annual Nature Fest. NHM teamed up with Nickelodeon to commemorate the 20th Anniversary of SpongeBob SquarePants, presenting the "Science of SpongeBob" to over 9,000 attendees. Along with costume character meet and greets, NHM Marine Biodiversity Center scientists led a hands-on activity to teach participants about the institution’s ongoing eDNA research and the real species that inspired the show's main characters.