The new short, directed by and starring Vincent D’Onofrio, employs the studio’s unique hybrid live-action/animation process where the visuals immerse the viewer in what feels like a moving graphic novel. 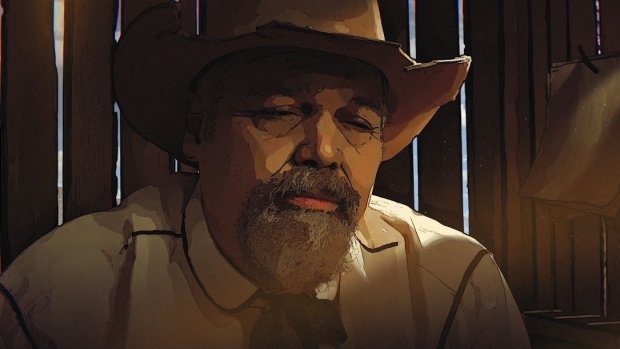 Game of Thrones franchise creator George R.R. Martin and Trioscope Studios have teamed to produce a short film based on the sci-fi short story “Night of the Cooter” by Howard Waldrop. Directed by and starring Vincent D’Onofrio, the production uses Trioscope’s hybrid live-action/animation process to create the feel of a moving graphic novel.

“The post-production on the film is where the true look of it starts to unfold,” shared D’Onofrio, “in how Trioscope crafts the photography frame by frame with the colorization and detail of each shot. We are watching our film come to life.”

Night Of the Cooters tells the tale of townsfolk in Pachuco Texas in the 1800's rallying around one cause, survival against the unwelcome visitors from "up there." Check out the just dropped trailer and join the townsfolk on their journey to figure out what the hell is going on in the big hole at the edge of town.

“Here at Trioscope, we’ve created a hybrid of animation and live-action drama that amplifies the best of both genres,” explained Trioscope CEO L.C. Crowley. “Especially important within the structure of a short film, our unique approach immediately transports and immerses the viewer into a dramatic new world – one that gives nuance to the actors’ performances and their characters. We’re honored to partner with visionaries George R.R. Martin and Vincent D’Onofrio to bring their wild imaginings to vivid life.”