George Lucas to Be Honored by SMPTE

'Star Wars' filmmaker George Lucas to receive honorary membership in the Society of Motion Picture and Television Engineers, the highest accolade handed out by the global engineers society and standards-setting body. 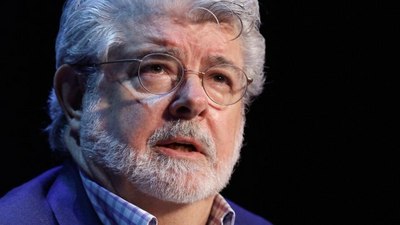 Star Wars filmmaker George Lucas will receive honorary membership in the Society of Motion Picture and Television Engineers, according to a report by The Hollywood Reporter. The accolade, the highest one handed out by the global engineers society and standards-setting body, will be handed out during its October 24 Honors and Awards ceremony.

Lucas founded visual effects facility Industrial Light and Magic in 1975; Pixar Animation Studios started as the Graphix Group of Lucasfilm in 1979; and in 1981, Lucas co-founded the sound company THX. His Star Wars: Episode II: Attack of the Clones was the first major Hollywood feature to be filmed with digital cameras.

Also during the awards ceremony, which will be held at the SMPTE annual Technical Conference and Exhibition at Lowes Hollywood Hotel, Dolby Laboratories senior vice president Ioan Allen will receive SMPTE's highest medal award, the Progress Medal. In 1988, Allen received an Oscar statuette along with company founder Ray Dolby. His sound innovations include work on Dolby Stereo, Dolby Spectral Recording and Dolby Digital.

Leonardo Chiariglione, who is credited as a key force behind the development of the MPEG standards that underpin many digital moving pictures applications, additionally will receive honorary membership in SMPTE.

Other honorees include Hollywood vet Jim Houston, whose work involves contributions to the development of the Academy of Motion Picture Arts and Sciences' Academy Color Encoding System (ACES). He will be awarded the Technicolor/Herbert T. Kalmus Medal.

SMPTE will recognize members such as Clyde D. Smith Jr., senior VP new technologies at Fox Network Engineering and Operations, who will be given the David Sarnoff Medal for TV technology development. Neil Beagrie, who established the Digital Preservation Coalition, will receive the Archival Technology Medal. Barry Haskell, who has contributed to developments with MPEG and H.264 standards, will be granted the Digital Processing Medal. Eric R. Fossum, will receive the Camera Origination and Imaging Medal. VillePulkki will be awarded the Samuel L. Warner Memorial Medal. And Philip Tudor will be granted the Workflow Systems Medal.

John Logie Baird (1888-1946) is to be inducted into the SMPTE Honor Roll, which posthumously recognizes lifelong contributions to the industry. Baird has been credited with presenting the first live television demonstration, the first publicly shown color television system, and the first fully electronic color television picture tube.