Hit animated series from Genius Brands International, 'SpacePOP: Not Your Average Princesses,' voyages to the big screen as a special one-night event in cinemas this fall. 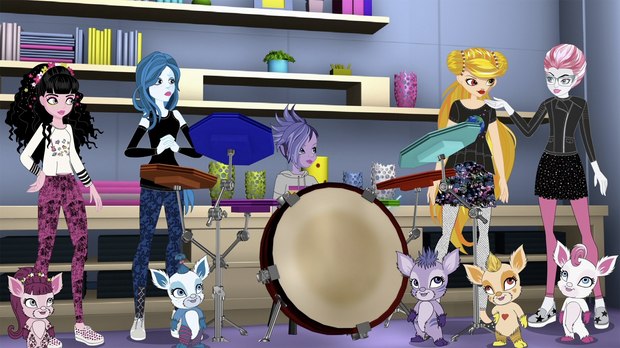 As part of the September 16 event, attendees will see the first feature length compilation of season one of Genius Brands' animated YouTube series, a SpacePOP season two sneak peek, the premiere of new music videos and a special surprise featuring some of SpacePOP’s biggest fans. Each SpacePOP fan who purchases a ticket will receive a copy of the SpacePOP original music soundtrack, a 20%-off coupon from official SpacePOP Halloween partner Spirit Halloween and discounted tickets to Six Flags’ wintertime celebration, Holiday in the Park, while supplies last.

Since its June 2016 premiere, the popular SpacePOP animated series has released over 100 short-form episodes and original music videos garnering over 15 million channel views, 50,000 subscribers and approximately 300,000 hours viewed. This special nationwide cinema event will introduce new audiences to the colorful, intergalactic adventures of the SpacePOP princesses and give existing fans an exciting a new way to engage with the story by getting an early look at what is in store for the Princesses of the Pentangle in season two.

“In less than a year since the debut of the SpacePOP brand, we have successfully extended the characters and storylines across multiple online and offline channels, including YouTube, SVOD and OTT platforms, iTunes, PopJam, Musical.ly, and at specialty, mid and mass retailers, to touch virtually every aspect of our audiences lives,” explained Stone Newman, President, Global Consumer Products, Worldwide Content Sales & Marketing for Genius Brands. “Releasing SpacePOP on the silver screen is the next frontier to exponentially build upon our fan base.”

“Fathom is very excited to be a part of bringing SpacePOP from its home on YouTube to the big screen,” Fathom Events Vice President of Programming Kymberli Frueh said. “This will give audiences the unique experience of seeing their favorite characters larger than life and alongside fellow passionate fans.”

Building on the successful launch of over 100 SpacePOP consumer products in 2016, at Kohl’s, Claire’s and Toys R Us, Genius Brands will expand SpacePOP into new categories and retailers. Highlights for 2017 include the debut of Halloween costumes with Spirit Halloween, the launch of DIY activity kits and compounds with Claire’s and a dedicated SpacePOP retail section at Go! retail stores nationally. Genius Brands is also executing a marketing campaign featuring national partnerships with Six Flags and Zumba Kids. SpacePOP will expand into Europe and Asia with media and retail launches planned in the UK, China, Spain, Italy and Portugal.