“As Genius Brands continues to build and distribute our catalog across multiple platforms worldwide, our strategy is to collaborate with media partners that can deliver our content to our core demographic, and we are happy to welcome Spacetoon, Mediacorp and TVB to the family as we debut our programming throughout Asia,” commented Berman. “The appeal of our content continues to prove itself in virtually every market around the globe, resonating with young viewers and assuring parents feel comfortable about the entertainment choices they are making for their kids.” Thomas Edison’s Secret Lab, which recently launched in the U.S. on 160 public television stations throughout the U.S., and the all-new Kid Genius channel on Comcast’s Xfinity on Demand, follows Angie, a 12-year-old prodigy, and her young science club after they accidentally discover Thomas Edison’s Secret Lab.  The tricked out dream lab is equipped with gizmos and gadgets, including two of Edison’s very last inventions: a hologram that brings Mr. Edison himself “to life,” and a virtual reality machine that lets them go anywhere. Thomas Edison’s Secret Lab delivers fun-filled comedy, exploration and adventure to show kids how much fun science can be, encouraging them to explore the possibilities of their own imaginations. Edison encourages and inspires kids through a variety of scientific and technological explorations and lots of other fun, whacky, wild and engaging topics. Genius Brands Music will distribute the School House Rock-style music videos, created by Ron and Stefanie Fair. Genius Brands Music will also collaborate with other artists on the creation of an original pop album and music videos supported by an animated series and merchandise and licensing programs.

In Stan Lee’s Mighty 7, the first of three 90-minute movies, Lee stars as an animated version of himself, a legendary superhero creator. He teaches a crew of alien prisoners and their jailers, who have crash-landed on Earth, how to work together and use their powers to be superheroes. Each alien superhero has his or her unique powers and strengths, which aid in the group’s ability to combat enemies. 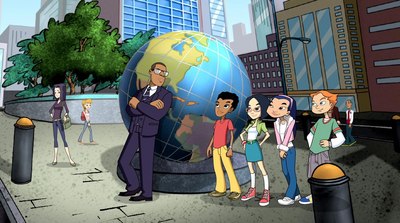 Secret Millionaires Club was created in partnership with and starring an animated Warren Buffett, features a group of kids who have adventures in business. Secret Millionaires Club empowers kids by helping them understand the world they live in, teaching them about the impact their decisions have on their own lives and teaching them to have the confidence to be the best they can be. The series makes it fun for kids to learn to think like entrepreneurs and features a robust list of guest talent, including Bill Gates, Jay-Z, Shaquille O’Neal, Nick Cannon, Gisele Bündchen and Kelly Rowland. The celebrities play themselves; provide their own voiceovers and lend the lessons of their own life experiences in the context of stories that are relatable and inspirational to kids. The series currently airs in countries all over the world and is available on digital platforms, including the Kid Genius channel on Comcast. The Secret Millionaires Club brand also includes the recently released book, How To Start Your Very First Business, from Downtown Bookworks; the successful annual “Grow Your Own Business Challenge” nationwide contest for kids and an in-school program in over 100,000 schools nationwide. This year, GBI will further expand the brand with new broadcast, licensing and retail partners.