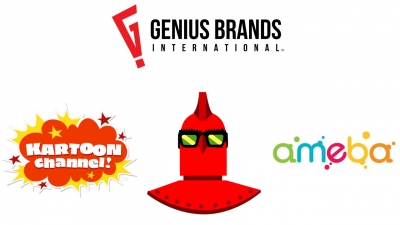 Steinman, a veteran digital media and entertainment executive, joined Genius Brands last year as Chief Revenue and Marketing Officer for Kartoon Channel!. Prior to Genius Brands, he served as Vice President in the Direct to Consumer division at The Walt Disney Company, which included Disney+ during its launch. He helped create solutions to leverage Disney’s portfolio of network brands, including Disney, Hulu, ESPN, ABC, Freeform, FX, and Nat Geo, while setting strategy for revenue teams. Previously, Steinman co-founded the digital media agency, M80, which provided digital media strategy, social media management and analytics to Fortune 500 companies. When WPP acquired M80, Steinman stayed on to lead the NBCUniversal business, where he negotiated multi-million-dollar media deals with Google/YouTube, Amazon, Disney, Twitter, Snapchat, Spotify, and others, while managing an annual budget north of $1 billion.

“Consolidating our consumer platforms under Todd’s proven leadership, gives us the ability to grow our brands globally, increase revenue and maximize profits more quickly, as he has done in his previous roles with the Walt Disney Company, Warner Brothers and WPP,” stated Genius Brands’ Chairman and CEO Andy Heyward. “There are an expanding number of opportunities to take advantage of, requiring a singular vision to achieve our ambitious goals, and Todd has an impeccable track record for developing and implementing profitable digital entertainment businesses. As we continue to grow, he will be focused on monetizing our brands and content in innovative ways to further propel Genius Brands as the global leader in children’s entertainment.”

Steinman commented, “I’m thrilled to take the reins of the newly created Genius Networks and lead operations, content, monetization, and distribution to further accelerate the Company’s consumer facing goals. We have a very talented, innovative and committed team, and given the current breadth of our brands on a multitude of platforms, we are positioned to drive growth and enhance profitability for each of our brands. Growth must go hand in hand with profitability, and that will be my focus.”