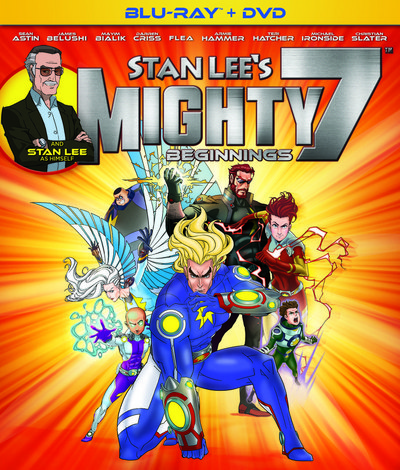 Factory Entertainment, leaders in the production and distribution of products that enhance fans experience with their favorite iconic brands, has secured a worldwide toy license for the franchise.

Additional licensees for the comic-book based property include Fame Jeans, for board shorts, flip flops and headwear in the U.S. and all apparel for Canada; Greensource for apparel in the United States; Adtn International Ltd. for board shorts and sleepwear in the U.S.; and JCorp for all apparel in Canada. These manufacturers are all targeting product launch for spring 2014.

“Stan Lee has proven his ability to create timeless superheroes time and time again,” said Heyward.  “His characters and storylines are legendary and with an all-star cast bringing Stan Lee’s Mighty 7 to life, the global marketplace is excited to be aligned with anything Stan touches.”

The SLAM 7 trilogy encompasses three 90-minute films, digital comic books and an animated television series set to debut in 2015. The Hub Network holds the world premiere rights for all three movies, starting with the first film installment, Beginnings, which has multiple airings in February 2014.  International distribution of the trilogy and the series outside of the U.S. is being handled by PGS Entertainment, which recently secured its first broadcast license deal with ABC Television Australia.

The all-star cast includes Armie Hammer (The Lone Ranger, J. Edgar, Social Network) as Strong Arm, the superhero with super strength; Christian Slater (Breaking In, True Romance) as Lazer Lord, the superhero who hurls balls of laser energy; Mayim Bialik (The Big Bang Theory) as Lady Lightning who possesses super speed; Teri Hatcher (Desperate Housewives) as Silver Skylark, the superhero who flies; Flea (Red Hot Chili Peppers, The Big Lebowski) as Roller Man, who rolls into a big ball and launches at high speed; Darren Criss (Glee) as Micro, who shrinks in size; and Sean Austin (The Lord of the Rings) as Kid Kinergy who’s superpower is telekinesis and even the legend himself appears as a central character in the films. Additional voices include Jim Belushi as Mr. Cross, the leader of a covert operations military division assigned to investigate UFO sightings; and Michael Ironside as Xanar, the leader of the warring aliens from the planet Taegon who enslave other planets and raid their natural resources.