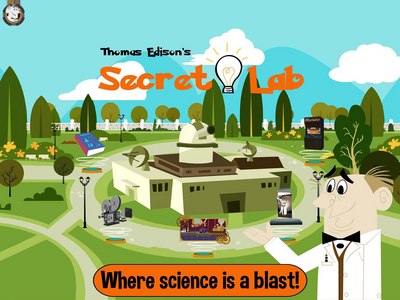 The Thomas Edison’s Secret Lab app captures all of the excitement of scientific experimentation and discovery while encouraging kids to use their imaginations and creativity to investigate, explore and unlock scientific wonders. Featuring a self-contained play environment offering real experiments that can be easily performed at home, games, an interactive inventor library to learn about the greatest inventors of all times and a screening room presenting episodes from the series. The new Thomas Edison’s Secret Lab mobile app is available for iOS and Android shows kids that science can be a blast!

“As kids are discovering the fun of Thomas Edison’s Secret Lab on Netflix, Comcast Xfinity and public TV stations across the country and in 60 international territories, we also wanted to provide a playful way for kids to experience the series on their handheld devices,” said GBI’s President of Global Consumer Products Stone Newman. “FatRedCouch did a great job of combining all of the exciting elements of Thomas Edison’s Secret Lab into an entertaining and playful interactive app that engages kids and involves them in the series as members of the Secret Lab Kids’ Club.”

“GBI’s premise and development of Thomas Edison’s Secret Lab unlocked the creative imaginations of our own development team,” added FatRedCouch Founder and CEO Nicole Lundeen. “When you open the secret lab of Thomas Edison, there are no limits to the activities and content you can offer.”

The Thomas Edison’s Secret Lab mobile app kicks off when the Secret Lab Kids, led by 12-year-old prodigy Angie, crack the secret coded message left behind by genius creator Thomas Edison, opening the door to the inventor’s secret laboratory as well as the discovery of a virtual version of Edison and his nearly completed robot, Von Bolt. Mobile app users venture inside the Secret Lab to play with interactive laboratory equipment and discover amazing science experiments and projects that can be conducted in their own home.  Moving on to the Library, the app features an interactive animated gallery of famous Scientists and Inventors, sharing interesting factoids from their backgrounds and their work, discoveries and amazing inventions with app users. Demonstrating that science is as fun as it is exciting, the app also offers three wacky games; Honey Bee Spree which has the Secret Lab Kids help their bee friend pollinate flowers; Kafloooey Ka-Splat, cranks up the kaloogalator to splat the Secret Lab Kids with Kafloooey!; and Von Bolt’s Circuit Switch, which has users connect the circuits to light up the light bulbs in this flip-tastic challenge!

In the app’s HoloCenter, users can meet the Secret Lab Club and preview 3D HoloCards for each cast member.  App users can also chose visit the Theater and experience great videos starring Thomas Edison and the Secret Lab Kids, including 6 Music Videos and 6 Episode Clips from the series.

Recently launched on Public Broadcasting Stations throughout the U.S., the series, also available through Netflix and the all-new Kid Genius channel on Comcast’s Xfinity on Demand, follows Angie, a 12-year-old prodigy, and her young science club after they accidentally discover Thomas Edison’s Secret Lab.  The ‘tricked out’ dream lab is equipped with gizmos and gadgets, including two of Edison’s very last inventions: a hologram that brings Mr. Edison himself to life, and a virtual reality machine that lets them go anywhere. Thomas Edison’s Secret Lab delivers fun-filled comedy, exploration and adventure to show kids how exciting science can be, encouraging them to explore the possibilities of their own imaginations. It even has a wacky (and slightly nervous) robot called Von Bolt, who becomes part of every adventure. In each of the episodes, Edison encourages and inspires the kids through a variety of scientific and technological explorations and lots of other fun, whacky, wild and engaging topics, School House Rock-style music videos and more, showing kids just how much fun science can be.