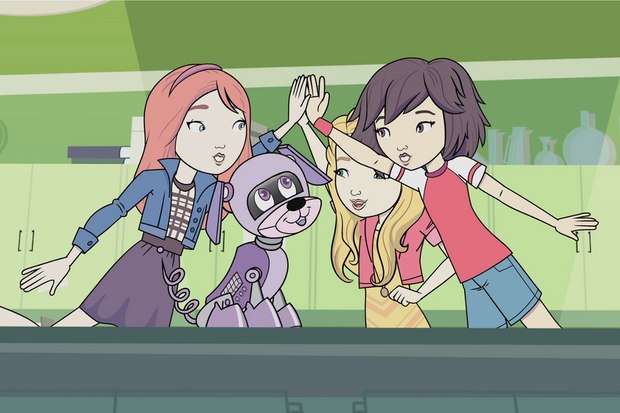 continues to build its Kid Genius Network, an on demand service available on Comcast’s Xfinity on Demand platform reaching 22 million U.S. households, by partnering with

Premiering on the channel on October 1st is the new animated series, Nancy Drew: Codes & Clues, featuring the smart, independent, gutsy and resourceful teen detective whose stories have been published in 22 languages with more than 100 million copies in print worldwide. In this new series, targeting girls ages 6-11, viewers will meet a tween version of Nancy and her best friends, Bess and George who must work together, along with their new robot puppy, to uncover clues to solve the mystery of the missing tech fair project. The series introduces younger fans to the foundational concepts of coding in a fun, engaging and accessible manner, as the de-TECH-tive team don undercover disguises, and employ coding principles to solve their clues together with critical thinking skills involving pattern recognition, problem solving and spatial visualization.

This content is based on the recently launched Nancy Drew: Codes & Clues story-driven, hidden-object mobile game from the award-winning mystery adventure game publisher and developer, HeR Interactive, developed for kids without any coding experience or skills.

In addition to launching on Kid Genius Network, Nancy Drew: Codes & Clues will be a new sponsor of GBI’s hit tween YouTube series, SpacePOP, which has already amassed over 7 million channel views since its June launch.

“In keeping in line with our mission of providing ‘content with a purpose,’ Nancy Drew: Codes & Clues is the perfect complement to our ever-growing Kid Genius Network, and we look forward to collaborating with HeR Interactive to create this compelling destination for young girls,” stated Deb Pierson, General Manager, Kid Genius Channel. “Introducing the foundational concepts of coding and problem solving to kids at a young age has become very important, and with our new channel, we are delivering that concept in an engaging and entertaining way.”

“The Kid Genius Network is the ideal entertainment platform to launch the Nancy Drew Codes & Clues channel,” said Penny Milliken, CEO of HeR Interactive. “In addition to the series, the branded channel will highlight our new app that has been sparking an interest in coding with early learners all over the world. Girls need to see and experience positive STEM role models in a way that matches their viewing, learning, and play patterns. What better way to introduce them to this coding super hero than through a streaming VOD platform reaching millions of fans?”