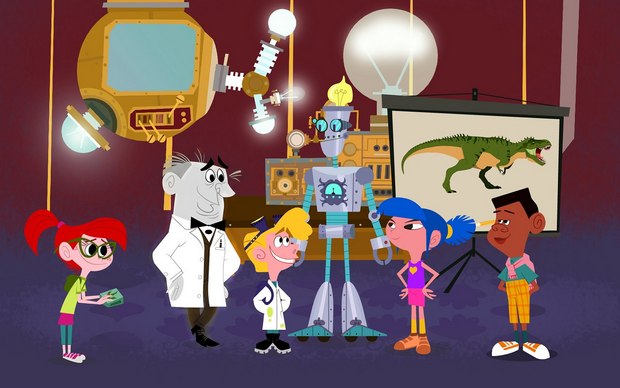 Thomas Edison’s Secret Lab is created by GBI, a global content and brand management company dedicated to providing entertaining and enriching "content and products with a purpose" for toddlers to tweens.  The 52 x 11-minute episodes premiere this fall on PBS stations through a partnership with American Public Television; the Kid Genius Channel on Comcast; and additional online services.

Each episode encourages young viewers to explore science, imagination and invention and is filled with comedy, exploration and adventure. The series follows Angie, a 12-year-old prodigy, and her young science club who accidentally discover Thomas Edison’s Secret Lab – a ‘tricked out’ dream lab equipped with gizmos and gadgets, including two of Edison’s very last inventions: a hologram that brings Mr. Edison himself “to life,” and a virtual reality machine that lets them go anywhere. Edison encourages and inspires kids through a variety of scientific and technological explorations and lots of other wacky, wild and engaging topics. There’s even a robot called Von Bolt, who becomes part of every adventure.

Contemporary upbeat School House Rock-style original music videos help reinforce the science at the end of each episode. A library of original songs written for Thomas Edison’s Secret Lab has been produced by music industry veterans Ron and Stefanie Fair, who have written and produced for numerous multi-award winning artists, including The Pussycat Dolls, the Black-Eyed Peas, Mary J. Blige, Fergie, Christina Aguilera, Lady Gaga and others.

“The talented team at Wicked Cool Toys have a deep passion and inventive spirit, and we are delighted to partner with them to introduce a range of products inspired by one of the most prolific inventors in history that will spark kids’ imaginations,” comments Stone Newman, President, Global Licensing, GBI.