Directed by Antoine and Tarik Hamdine, the half-hour CGI comedy was commissioned by French broadcaster M6 and coproduced with DQ Entertainment. 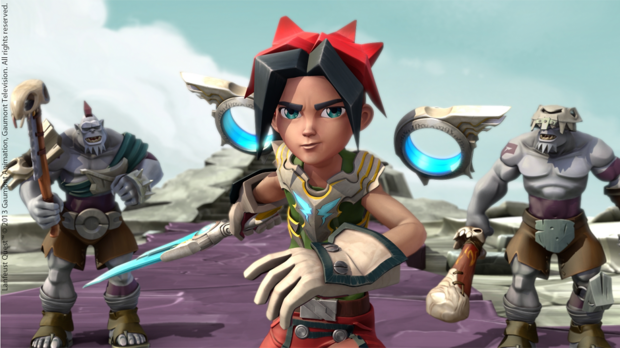 Lanfeust Quest will make its debut in Spain thanks to free to air broadcasts on Disney Channel and a second FTA window on TVE. Other free to air broadcasts will take place on ABC3 in Australia, on Disney Channel in German-speaking Europe and Turkey as well as Disney XD in the Netherlands. On the Pay TV front, Biggs Channel acquired the series for Portugal while Disney XD acquired the show in Belgium, Italy, Turkey, Germany and Spain as well as Central Eastern Europe, the Middle-East and Africa.

Pierre Belaïsch, Managing Director, Gaumont Animation: “We are particularly thrilled to see Lanfeust Quest generating such enthusiasm across so many countries and regions. This is a reward for the incredible talents who have strived to translate the original books into a kids series of international appeal.”

Directed by Antoine Charreyron (The Prodigies, Galactik Football) and Tarik Hamdine, the 26-episode half-hour, CGI epic comedy for kids 6 to 11 was commissioned by French broadcaster M6 and coproduced with DQ Entertainment. It was also acquired by Lagardere’s Canal J. In this series, 14 year-old Lanfeust is living out his dream as the only hero in charge of protecting Planet Troy. An action-packed adventure with an incredibly positive hero, full of character flaws with which young viewers will identify, LANFEUST QUEST gathers feature-film-like animation and an opening theme composed by Pirate of Carribean’s Klaus Badelt. Founded in 1997, Gaumont Animation, formerly Alphanim, is one of Europe’s leading producers and distributors of children’s entertainment. The company has produced and distributes a catalogue of over 30 kids’ television series and 800 half-hours of animation broadcast in over 130 countries, including the US and Japan. Flagship titles are Galactik Football (Disney XD, 78x26’), Robotboy (Cartoon Network, 104x13’) Santa’s Apprentice (52x13’ & Feature film), Calimero (104x13’) and Dude That’s My Ghost (Disney XD, 52x13’).  The company is also active in consumer products, music publishing and interactive media.