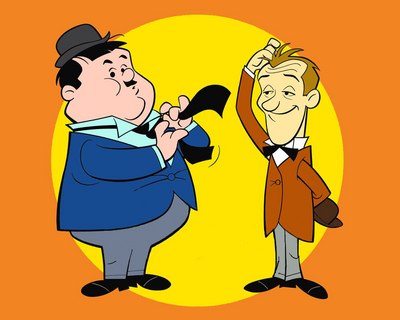 PARIS, FRANCE -- Gaumont Animation, one of Europe’s leading producers and distributors of children’s entertainment, has secured the worldwide exclusive option to the animation rights of the iconic duo, Laurel & Hardy, from Larry Harmon Pictures Corporation, and is set to finance, produce and distribute an all-new 78 x 7’ 2D animated series Laurel & Hardy.

Laurel & Hardy is one of the most famous and beloved comedic teams of all time. It has been nearly 50 years since Larry Harmon Pictures and Hanna-Barbera teamed up to produce the original animated cartoon series.

“Laurel & Hardy are without a doubt two of the worlds’ best-known icons. To be given the opportunity to re-launch this unique iconic property has been a dream of mine for many years,” commented Pierre Belaïsch, Managing Director, Gaumont Animation, in making the announcement. “In 1966, Hanna-Barbera produced 156 animated episodes and fans everywhere fell in the love with the animated duo. We want to bring the world a totally new series with an updated look, design and feel while maintaining the slapstick humor that made this twosome world famous. Additionally, we are honored to be working directly with Larry Harmon Pictures, who has owned the rights to Laurel & Hardy for nearly 50 years.”

The new comedy series is targeted at children 5-8 years old, yet is perfect for kids of all ages. Gaumont also plans to support the series with licensing and merchandising campaigns. Set to be fresh, bright and fun, the episodes will feature the one-of-a-kind, character driven comedy of Laurel & Hardy, along with famous catchphrases such as, “Well, here's another nice mess you've gotten me into, Ollie!”

“I am so excited to see that one of the world’s leading animation producers recognizes the special opportunity to introduce these iconic characters to a whole new audience,” stated Susan Harmon, widow of Larry Harmon and President of Larry Harmon Pictures. “The lovable Laurel & Hardy made me laugh as a child and I know they will do the same for today's kids and hopefully for many generations to come.”

One of the most popular comedy duos ever in cinema history, Arthur Stanley Jefferson and Oliver “Ollie” Hardy (born Norvell Hardy) appeared in over 100 films together. They became well known during the late 1920’s and appeared in films together until 1950.