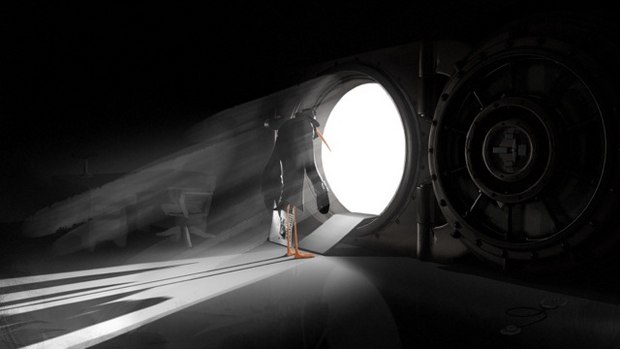 Minneapolis – Gasket Studios, a design, animation and VFX company, recently produced a stylized 3D-animated sponsor reel for the 16th Annual Provincetown Film Festival (PIFF). Written and directed by Alex Boatman, “The Oystercatcher Catcher,” was inspired by the film noir theme of this year’s festival, and Pecker, the official PFF mascot. The delightful animated story reveals that Pecker is no ordinary fedora-wearing private-eye. He is actually a thief.

“Gasket took this year's sponsor reel to imaginative new heights,” says Andrew Peterson, PIFF Director of Programming. “Not only does it embody the caliber of creativity and storytelling our festival celebrates, but also it's a cleverly fun ode to this year's film noir theme, which we chose to honor the late Evan Lawson, former President of the Provincetown Film Society Board of Directors, who was a huge fan of the genre.”

“The client directive was specific about staying true to the original Pecker illustration in the festival promotions, as well as portraying his irreverent personality,” remarks Boatman. “Otherwise, they were very open to our ideas and encouraging with their feedback, which allowed us to focus our time on refining the artistic whole of the film.”

Boatman first researched the tradition of film noir – vintage and modern – to create a reference library of images and videos for inspiration. After exploring common themes like jealousy, adultery and betrayal, she settled on the genre's most iconic and powerful storytelling device: the detective.

Aspiring to translate the instantly recognizable aesthetics of film noir though animation, she imagined a painterly 3D world. A restrained color palette, which was desaturated to virtually black and white, maintains the film's vintage look. Heightening the mystery and atmosphere, Gasket employed digital lighting and shadows to create fog, mist, street and sign lighting. Feather-textured vignettes enhance the dark, grungy mood of the story's bird-infested world.

The models for the characters and cars were designed with exaggerated features and rendered in a hybrid cartoon style to look graphic and align with the aesthetic Boatman envisioned. After executing the animations fairly quickly, she says a majority of the production, working closely with Technical Director Justin Greiner and Look Artist Tiffany Borchardt, was spent on matte-painting backgrounds and texturing 3D elements for a consistent hand-crafted quality.

“We knew we wanted to do this piece in 3D from the start, so embarking on the project was a matter of establishing a style,” explains Boatman. “While it took a bit of trial and error to achieve, we were able to arrive at a unique look that is gritty and real, yet strangely beautiful.”

“Overcoming the technical restrictions of the animation techniques we explored was one of the most rewarding aspects of this project,” adds Borchardt. “We don't normally get the opportunity to create matte-painted backgrounds due to time constraints, so we had a lot of fun working by hand. The end result is beautiful and totally worth it.”

BWN provided the music and sound design, which Boatman says brought a whole new level of grit and realism to the film.

“Most of our commercial projects almost entirely revolve around the quality and style of the animation,” Boatman concludes. “This piece was a welcome departure because we were able to make the story the main focus while letting different visuals elements and the music enhance it.”