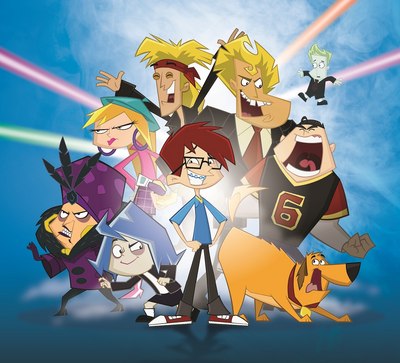 The new animated 'toon follows the comic misadventures of nerdy first year high schooler Ace McDougal, who is catapulted into one thrilling adventure after another when he is accidentally fitted with some super cool, ultra high-tech, experimental braces.

Ace’s braces may look like regular braces but they’re in fact the ultimate in spy technology featuring a laser beam, mega-magnet, super-sticky-slime-blaster, a tactical-escape-smokescreen and Ace’s favourite, a nauseous gas generator plus a whole lot of other awesome stuff Ace is yet to discover. About the only thing his new braces can’t do is straighten Ace’s teeth! The whole system is controlled by H.U.G.O (Holographic User Guidance Operative) a fussy, superior and totally obnoxious computer hologram that only Ace can see. Hugo is absolutely impossible but he must do Ace’s bidding and Ace can’t operate his braces without him so, like it or not - they’re a team.

"Get Ace has been a blast to produce. It's a quirky, high octane comedy centred around our geeky hero Ace and his formidable sidekick Hugo. We've taken classic cartoony animation and given it a modern twist. With traditional elements like bumbling villains, big extreme characters and whacky storylines all mixed with cool college band music" said Gian Christian who, as well as directing the voice actors on the series, also voices a number of characters himself.

Dina McPherson, who heads up the show’s writing team said, "I always wanted the show to resonate with kids and for people to care about the characters. From the outset when Gian and I created Get Ace, we carefully crafted themes, storylines and characters that are not only thoroughly entertaining, but kid relatable.  The  series  follow  our  fearless  hero  Ace,  as  he  attempts  to  navigate  the  challenging  and somewhat  clumsy  journey  through  High  school,  facing  the  same  daily  trials  and  tribulations  as  our audience; from embarrassing parents, to peer pressure and everything in-between. But Ace does all this with the added benefit of some super cool, high-tech spy braces.”

"The Network is absolutely thrilled to be the Australian broadcast partner for this high quality children's production. We are all about entertaining the young audience and Get Ace will do exactly that." said Cherrie Bottger, Network Head of Children's Programming for Network Ten Australia