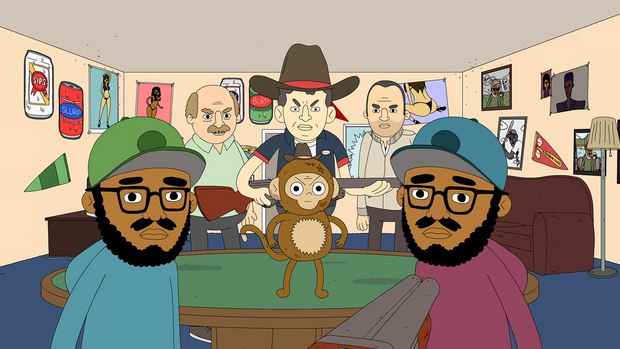 Fans will get a sneak peek at the animation block on January 1st at 12 AM ET/PT immediately following a special marathon of The Simpsons. Following the official launch on January 22, the animation block will air on Thursdays at midnight ET/PT, featuring fresh episodes of Lucas Bros. Moving Co. and Stone Quackers.

“Based on the successful launch of The Simpsons on FXX, this is the perfect time to expand our animation offerings and make FXX the after-hours destination for animated shorts and series,” said Chuck Saftler, President of Program Strategy and COO, FX Networks, in making the announcement.

“We are insanely excited to partner with FXX and help them create a new block of programming for the network,” said Nick Weidenfeld, President ADHD Studios. “I can’t think of a better home for our cartoons or a better way to launch theLucas Bros. Moving Co. and Stone Quakers then after The Simpsons. 2015 is going to be an awesome year.”

The new animation block will offer a sneak preview on January 1 immediately following a New Year’s Marathon of The Simpsons. Beginning with The Simpsons Movie on Wednesday, December 31, at 7 PM ET/PT, FXX’s exclusive 29-hour marathon will telecast every premiere and finale from 25 seasons of The Simpsons, culminating in an encore showing of The Simpsons Movie on Thursday, January 1, at 10 PM ET/PT. The animation block will follow the marathon with new episodes of Lucas Bros. Moving Co. and Stone Quackers, along with encore showings of High School USA!, Axe Cop and other animated shorts.

Fans of Archer, FX’s #1 rated comedy series, will also be treated to the new episodes of Lucas Bros. Moving Co. and Stone Quackers immediately following the Season 6 premiere of Archer on FX on Thursday, January 8 at 10 PM ET/PT.

LUCAS BROS. MOVING CO. -- Brooklyn-based comedians and identical twins Keith and Kenny Lucas get animated in the Lucas Bros. Moving Co. After inheriting their uncles van, the Brothers begin to run a moving company in their neighborhood of Greenpoint, Brooklyn, populated by everyone from their best friend Jerrod (Jerrod Carmichael) to Jake the Snake Roberts, and their mom (Hannibal Buress). The brothers work only to pay their rent and drink beer at Jerrod’s bar, but nothing is easy for the Lucas Brothers. Even the simplest job of installing an air conditioner leads to an epic trek through a frozen tundra in the basement of their apartment building. Guest stars include Abbi Jacobson and Ilana Glazer from Broad City; Adam Devine, Anders Holm, Blake Anderson and Jillian Bell from Workaholics, Jimmy Tatro (22 Jump Street), Michael Che (Saturday Night Live), Eric Andre (The Eric Andre Show), and musical artists Action Bronson, ?uestlove, Danny Brown, YG and Tyler the Creator.

STONE QUACKERS -- Stone Quackers will shock, it will disturb, it will provoke. Executive produced by the acclaimed actor John C. Reilly and renowned artist/creator Ben Jones, the duck denizens of Cheeseburger Island endure hardships ranging from hurricanes, severed heads to dangerous hot dogs and the shame of being alive. The show is based on the upbringing of Whitmer Thomas and Clay Tatum (from the lauded live show PowerViolence) and their experience living in the remote and strange city of Gulf Shores, Alabama. Actress/writer, Heather Lawless (The Heart, She Holler) also stars as John C. Reilly’s angelic yet deviant paramour. Guest stars include Pam Adlon (Louie, Californication), Rory Scovel (Ground Floor) and Budd Anthony Diaz (PowerViolence) with music from The Zombies, Lightning Bolt, and The Doobie Brothers.