FXHOME announces the latest version of its video editing and visual effects software, HitFilm 3 Pro is now available for pre-order. 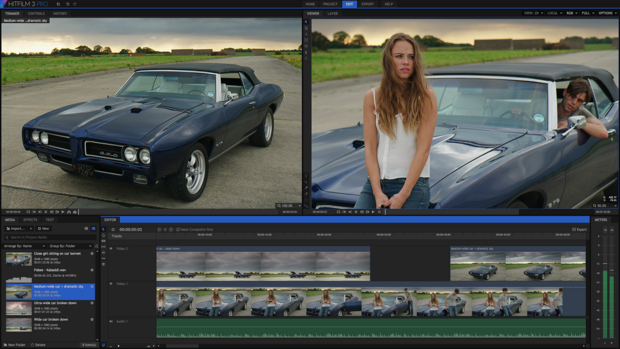 FXHOME has announced that the latest version of its cutting-edge video editing and visual effects software, HitFilm 3 Pro, is now available for pre-order from hitfilm.com, ahead of its release on 24th November 2014.

HitFilm 3 Pro is a post-production revolution, combining high quality editing tools, 3D compositing, 3D object rendering, an industry leading particle simulator and an expansive toolkit for advanced colour correction and grading, all in a single product. Over 180 fully customizable visual effects are included plus 130 plugins for use in Sony Vegas, After Effects, Premiere Pro, Final Cut Pro X and Motion.

From films to documentaries, commercials to music videos, HitFilm 3 Pro has features for beginners and experts alike, combining depth and complexity with an intuitive simplicity. Modern filmmaking requires you to be an editor, VFX artist and colorist at the same time: HitFilm 3 Pro gives you everything you need.

The redesigned editing timeline gives users access to all the tools they need including slip, slice, ripple and roll edits, audio meters, keyframing and a new trimmer for fine control. Filmmakers craft projects in the fast, non-linear editor and can switch between multiple 3D compositing timelines as easily as changing tabs in a web browser.

Filmmakers can generate thousands of particles with HitFilm 3 Pro, all of which are fully customisable in true 3D, from fleets of spaceships or swarms of creatures through to swirling snow, driving rain or thick dust and debris from an explosion.

Videos, images, 3D models and particles can all be combined in a unified, 3D compositing environment. All elements are rendered accurately in relation to each other, making it easy to construct incredible scenes inside a single application.

“HitFilm 3 Pro is the best product we’ve ever created and is the result of two years of intensive development. Since we set up back in 2001, FXHOME has stood for supporting the next generation of filmmakers,” explained Joshua Davies, FXHOME founder and CEO. “With HitFilm 3 Pro, we have created a compelling combination of power and price, putting professional visual effects and editing software in the hands of students, indie filmmakers, educational institutions, VFX studios and YouTube creators; in fact, anyone wanting power, choice and value in one package.”