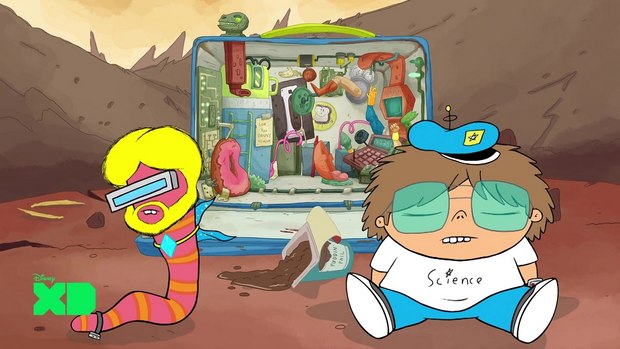 BURBANK, CA -- Future-Worm!, the animated comedy adventure series about an optimistic 12-year-old who creates a time machine lunch box, and then meets and befriends a fearless worm from the future (with titanium-enforced abs), premieres Monday, August 1 (11:00-11:30 a.m. EDT) on Disney XD. Created and executive-produced by Emmy Award-winning director Ryan Quincy (South Park), the comedy follows Danny and Future Worm as they embark on adventures through space, time and study hall. The characters were introduced last year in a popular Future-Worm! short-form series on Disney XD and Disney XD's YouTube Channel. "Healin' Touch with Dr. D" (3-minute) – After Danny gets a brain freeze, Future Worm puts him on a future medical TV show where the doctor is a terrifying Tyrannosaurus Rex.

"Terrible Tuber Trouble" (7-minute) – Danny's attempt to make his parents dinner while also playing with his new chemistry set inadvertently leads to the creation of a potato monster.

"Long Live Captain Cakerz!" - Danny discovers that his favorite Captain Cakerz cereal is mysteriously sold out, so he and Future Worm travel back in time to find out what happened to it. Guest starring are astrophysicist Neil deGrasse Tyson as himself and Jonathan Frakes as Steak Starbolt.

"Robo-Carpe Diem," a new game where players can design and feed their own Robo Carp, a faulty, malfunctioning robot fish on wheels, before it explodes, launches on the Disney XD app.

The series is a production of Disney Television Animation and carries a TV-Y7 parental guideline.