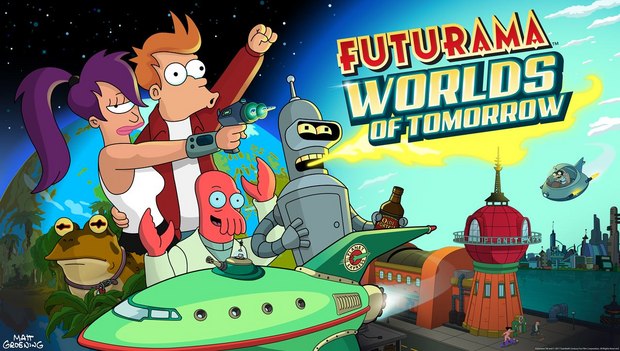 ALL GLORY TO THE HYPNOTOAD! Jam City, via its game studio TinyCo, and FoxNext Games announced that their mobile game Futurama: Worlds of Tomorrow is available today on the App Store and Google Play.

TinyCo has released two new animated trailers alongside the game, one of which reveals the game’s all-new story created by Matt Groening, Futurama co-developer and head writer David X. Cohen, and the Futurama writers. This story sets the stage for a galactic adventure that will take players across the universe in search of ancient alien artifacts to restore the fabric of spacetime after it is transformed by one of the universe’s most recognizable yet enigmatic creatures: the Hypnotoad.

“Hypnotoad has always been one of Futurama’s most mysterious amphibians,” said Groening. “In this game we finally get to learn much more about his bizarre abilities and mating habits. Perhaps too much more.”

Created in partnership with Futurama creator and executive producer Matt Groening and his Curiosity Company, along with executive producer David X. Cohen, original Futurama writers, and Rough Draft Studios, Futurama: Worlds of Tomorrow blends simulation, combat, galactic exploration, and choose-your-own-adventure gameplay together to bring the escapades of the Planet Express crew to life. Players will experience new stories from the writers of Futurama that are filled to the brim with the wit, charm, and sci-fi hijinks that fans have come to know and love. Today’s launch is just the beginning for Futurama: Worlds of Tomorrow, however, as the game will be updated with new characters, quests, and stories every week.

“Bringing Futurama back in such a new and ambitious form was extremely difficult,” said Cohen. “Especially for the people I was bossing around and yelling at.”

In addition to its popular original IP games such as Cookie Jam and Panda Pop, Jam City has made a science out of turning some of the world’s largest entertainment franchises and brands into hit mobile games. The mobile gaming publisher is the creator of six of the Top 100 Highest Grossing games played nationwide across both iPhone and Android devices.

“We are Futurama fanatics,” said Chris DeWolfe, co-founder and CEO of Jam City. “As such, it is quite an honor for us to collaborate so closely with Matt Groening and David X. Cohen on Futurama: Worlds of Tomorrow.”

“Jam City has a unique heritage of translating original TV brands, like Futurama, into mobile gaming platforms that will be played by tens of millions of fans worldwide,” DeWolfe continued. “By blending contemporary culture and science fiction, we have created a next-gen mobile experience for core fans and those who are new to Futurama. We could not be more thrilled to continue the Futurama story here at Jam City.”