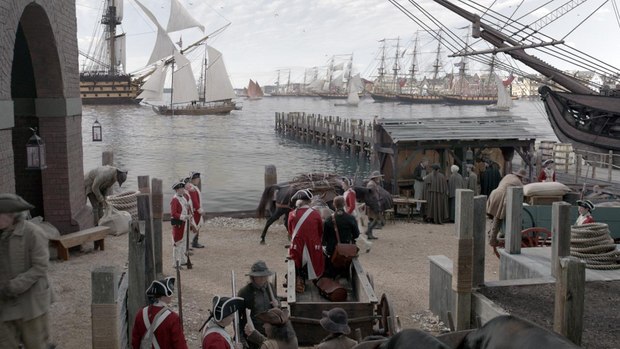 BURBANK, CA – AMC’s Revolutionary War drama TURN: Washington’s Spies transports viewers back to the cities, villages, plantations and battlefields of colonial America. Visual effects artists from FuseFX worked closely with the show’s production team to ensure that all of those locations, their buildings and geographic features are historically accurate, that the ships, flags and musket shots were correctly represented.

TURN, which just finished production of its third season, was developed by Craig Silverstein, is executive produced by Silverstein, Barry Josephson and Michael Taylor, and is based on Alexander Rose’s book Washington's Spies: The Story of America's First Spy Ring. It centers on an unlikely group of espionage agents based in the small town of Setauket, New York, who help turn the tide of the war. The show is shot on location, using Williamsburg, Virginia as a stand-in for Philadelphia and Petersburg, Virginia for New York. Setauket scenes are shot on a location-built set. Much of the work for the visual effects team centers on adding details in the form of set extensions, matte paintings, water and other elements to make the real-world locations conform to the historic sites.

“Our job is to create things that are either too expensive or too large to build,” explains Production Visual Effects Supervisor Terry Windell. “We aim for feature quality in the visual effects, but we are working with deadlines and budgets that are not what you get on a feature, so we have to be very efficient and smart.”

“Many of our building references come from photos of Dutch buildings that used to be in New York,” recalled FuseFX VFX Supervisor Jon Massey. “Since nearly all of those are gone, we look at European buildings from that same time period, for instance from the Dutch Quarter of Potsdam, Germany.” The matte paintings used to turn Williamsburg into colonial Philadelphia and Petersburg into New York also feature digital representations of iconic structures such as Independence Hall and Trinity Church. Additionally, the VFX crew was responsible for removing any modern elements, wires and telephone poles, captured in the production footage, and for adding musket smoke and blood wounds that production is not able to capture.

Careful research also goes into the creation of CG ships. “The HMS Victory, Admiral Nelson’s flagship, which dates from the same era, still exists in England and there is a lot of good reference related to it,” noted Massey. “That has been very valuable to us.” He added that the attention to detail extends to the flags flown by the ships. “The flag used by the British Navy in North America at that time was the Red Ensign, where the Union Jack appears in an upper corner against a red field. It was the precursor to the flag of the United States.”

The VFX team has adopted an almost fanatical devotion to historical accuracy. “A mistake will be noticed,” Massey observes. “There are websites dedicated to research on the show and a lot of history buffs who watch it. Production invests considerable effort into getting the details right and we try to hold up our end as well.”

One of the biggest challenges for the VFX team is water. The real-world Setauket is a harbor town on the Atlantic, but the set representing it is inland. Waterfront views therefore need to be added to most exteriors. Convincing CG water effects can be time-consuming to produce, but FuseFX has developed a hybrid approach where CG and practical elements are combined.

“Ten years ago, you couldn’t have done CG water for an episodic television show, but our technology has come a long way,” explained Massey. “Now you can get 80 percent of the way there using the existing software tools we have at FuseFX. Still, it’s the last 20 percent, where you are fine-tuning and integrating practical waves, foam and swells, that takes the most care and effort.”

“We chose to work with FuseFX because of their ability to create water effects and what they’ve been able to accomplish on a television time-frame is amazing,” said Windell. “Their matte paintings and recreation of iconic buildings and ships add production value. Across the board, everyone who works on this show is top notch. The quality of the writing sets the tone and inspires us to do great things.”

“I find it incredibly fulfilling to work on a period piece where the job is not to be seen,” Wendell concluded. “If viewers accept what they see as reality, that’s the highest compliment.”

Season Three of TURN: Washington’s Spies, the Revolutionary War spy thriller, builds towards one of the most notorious moments in American history, the treasonous defection of Benedict Arnold (Owain Yeoman). Behind enemy lines on Long Island, Abe Woodhull (Jamie Bell) is a spy for the Patriots, reporting directly to George Washington (Ian Kahn). Embedded within the Continental Army, Benedict Arnold is seduced to become an informant for the British. As the consequences of their espionage ripple through the battlefield, the spy game becomes a heart-stopping race to see which mole will be unmasked first. In 1778, there is only one fate that awaits a captured spy, the hangman’s noose.The price for treason is blood, and not all of our heroes will survive.