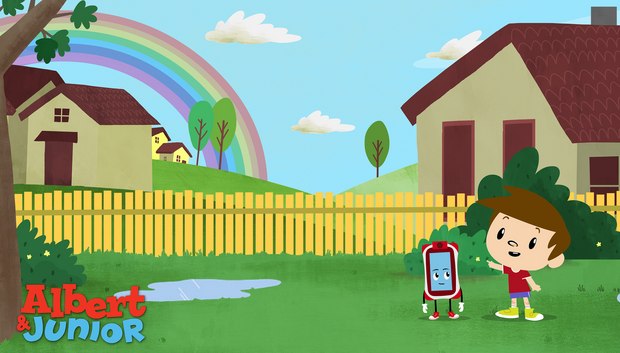 Fuhu, Inc., and BabyFirst, the child development TV network devoted to delivering high-quality child development programming to tots and their parents, have teamed up to co-produce the all-new original animated series Albert & Junior which will premiere on BabyFirst on March 10th.  The program, which marks Fuhu’s first foray into television production, is inspired by the company’s popular nabi kids technology brand.  Albert & Junior chronicles the adventures of a curious 3 year-old boy named Albert and his best friend Junior – a character modeled after Fuhu’s nabi Jr. tablet.

The first ever nabi original series for kids was developed with the goal of encouraging the natural curiosity that all children possess by opening the door to conversations and questions that kids may have about the big world all around them – from weather and science, to significant historical events. The show celebrates discovery, exploration and learning as Junior helps Albert find the answers to all of his questions by taking him, and the viewers, on exciting journeys to understand the featured topic.

“We have long been passionate about engaging kids and parents with enriching educational and entertainment content in new and meaningful ways. In collaborating with BabyFirst, we are thrilled to deliver an original animated series that brings nabi Jr. to life, to a community beyond our own nabi network to help children discover and explore the world around them. We are excited for this unique partnership that revolutionizes the way children’s content is produced and delivered.”

The show will introduce the nabi brand, and its mission to help kids discover and explore the world around them through safe digital experiences, to millions of households through this highly entertaining and educational original television content. Throughout the series, additional nabi characters will be introduced that provide engaging storylines while innovatively showcasing the brands’ personality and attributes.

Guy Oranim, CEO of BabyFirst, said, "Fuhu has been a great partner for BabyFirst. We are delighted to help them expand their brand into an educational and entertaining original show for our beloved viewers. Albert & Junior not only celebrates the wonderment of early childhood discovery, it also offers a great education-focused brand another opportunity to engage directly with families."

Developed for babies, toddlers and parents, BabyFirst shows inspire a variety of developmental skills.  BabyFirst focuses on the parent-child interaction.  It has earned critical acclaim for its series introducing growing children to the basic learning building blocks, including vocabulary, numbers, music, colors, art and much more.

Twenty-four, five minute episodes have been produced which will air exclusively on BabyFirst– available on DIRECTV, Dish Network, Comcast, and AT&T U-verse ─four times per day over the next 12 months.

Fuhu’s, nabi brand, led by its signature nabi tablet line – is designed  and created to deliver the best and most enriching, entertaining and educational experiences to kids.  The company was recently named America’s Most Promising company (2014) by Forbes magazine and America’s