ftrack 3.2 comes out next week with new API and customizable Workflows, as well as an app to come later in the year.

STOCKHOLM, SWEDEN -- ftrack, the project management solution for creative industries, launches version 3.2 next week. Along with the Actions functionality announced last April, 3.2 introduces several customer-driven features that expand the uses of the software.

New additions include Workflows functionality, which enables users to tailor ftrack to their industry, and an entirely rebuilt API that allows for more flexibility and deeper tool customisation.

Users can also look forward to the ftrack mobile app later in the year, which will allow users to track production on the go. 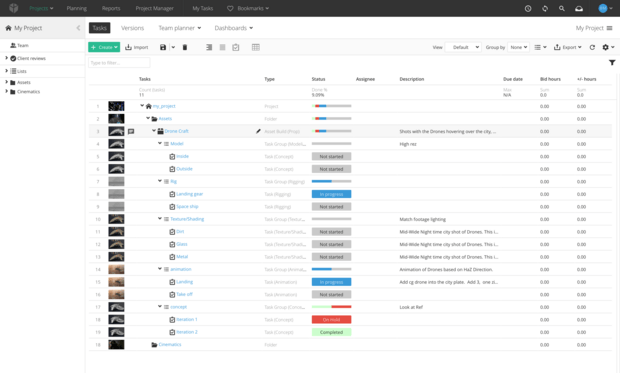 Workflows – tailor ftrack to your industry

Based on feedback from the ftrack community, 3.2’s new Workflows functionality greatly improves project structures by removing the rigidity of sequences, shots and tasks.

Rather than being forced to work under the previous task groups, ftrack 3.2 will allow users to customise the layout in whatever way best suits their project. Users can rename each group to match the terminology of their domain, thus making ftrack relevant to a far wider range of creative disciplines and markets, such as video games, motion graphics and architecture.

ftrack will now adapt to your workflow, rather than vice versa.

This adaptability will extend across the evolution of a project. As work progresses and the production’s needs become more defined, you can reorganise your ftrack project layout as you would a file system, making project management easier, more familiar, and appropriate to your specific industry – all without having to constantly rewrite code.

We are currently working with individuals in various industries to create custom Workflows templates. These templates will provide preset file structures that are tailored to a variety of specific industries.

"With the new Workflows functionality in ftrack 3.2, ftrack is now the most flexible project management solution on the market,” says Fredrik Limsäter, CEO at ftrack. “By allowing users to pick their own project structures, ftrack opens up to multiple industries that previously found the VFX shot and sequence structure a tricky workaround." Written from scratch for the new Python pipeline, the 3.2 API has much greater scope and covers more of the functionality nestled within ftrack. It’s as simple as the old API, but allows more avenues for developers to tweak and hone performance, opening up whole new ways of working with the software.

Fully documented and built around normal Python data structures, the new ftrack API is an out-of-the-box solution that allows for quick and easy tool customisation. Combining power with simplicity, developers will be able to code with greater ease than ever before: ftrack does the heavy lifting so you don’t have to.

ftrack’s new API also take care of complex and time-draining processes like caching, meaning you can spend more energy on the work that really matters.

The ftrack mobile app – project management on the go

Coming in September, the ftrack mobile app will allow users to stay on top of any ongoing projects even when away from their workstation.

Designed for project management on the go, the ftrack mobile app will allow users to check in on the status of tasks, log time, stop or start timers, receive notifications, and instantly get in touch with anyone else involved in the project, wherever they are.

The ftrack mobile app will bring you closer to your projects than ever before, making the production process more efficient and facilitating a more immediate response whenever it’s needed. The ftrack mobile app will be available later this year.

We’ve been working closely with The Foundry team to make this integration as good as it can possibly be, and as such it’s taking a little longer than we hoped. When it arrives it will enable new and streamlined ways of using the software. ftrack NUKE STUDIO integration is due this fall.

Fredrik Limsäter, CEO at ftrack says, “With ftrack 3.2, we’re opening up new ways of working with the software. No longer is ftrack strictly limited to the VFX industry – it’s now an open and customisable tool that will adapt itself to your workflows, whatever your market may be. Along with the NUKE STUDIO integration and mobile app coming later in the year, ftrack is shaping up to be the definitive tool for flexible, approachable and simple project management.”