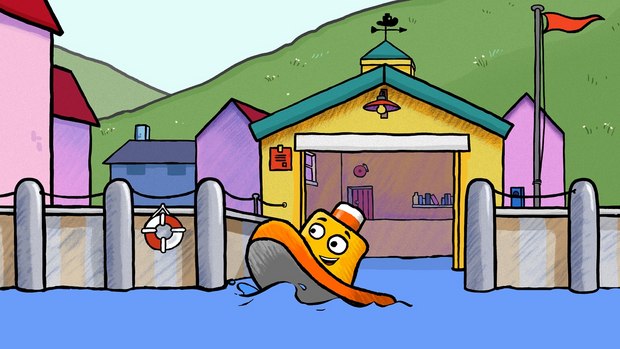 A 52­ episode order of an animated children’s television series is no small thing, especially with a slim pre­production cycle. As Cloth Cat Animation’s managing director, Jon Rennie, explains, “Animation series are run very methodically and with very definite targets. With 52 episodes to complete in just over a year, any delay or slip in the schedule can be disastrous for the budget.”

The Cardiff­based studio needed a solution to help it stay atop that commitment, and it found that in the form of ftrack, a unique cloud­based collaboration and production tracking platform. Embracing ftrack to keep tabs on production has allowed the team at Cloth Cat Animation to organize its assets and animatic approvals, keep track of loads of files and versions, and make sure it can meet its tight broadcast deadlines.

Cloth Cat Animation—a partner studio of Bait Studio and Thud Media—began using ftrack from the start of production on Toot the Tiny Tugboat, and has found it especially useful thanks to its easy integration with the likes of The Foundry’s HIERO and Thinkbox Software’s Deadline. With Toot currently running in the UK, Rennie reflected on ftrack’s role in helping to bring the show to air.

Toot the Tiny Tugboat is an animated adaptation of Toot and Pop!, a popular children’s book published in 2012 by author Sebastien Braun. As the title suggests, the series follows Toot, a lovable tugboat who spends his days helping other ships around the harbor. He’s not the most dedicated worker, often putting fun above duty, but he always gets his priorities sorted in time to get the job done. And much as the show entertains, it also provides useful lessons for its young viewers.

Lupus Films began developing the show with Braun back in 2012, and Cloth Cat was brought in the following year to form a partnership that also involved Channel 5, Twofour Rights, and Boom Kids. “Our reputation for quality animation and technical knowledge is well known,” affirms Rennie, “and the additional support from the Welsh Government for animation projects helped strengthen the deal.”

Toot also played to Cloth Cat’s strengths, as the 35­person studio specializes in 2D animation, having worked on other series like Boj and Wildernuts. Cloth Cat uses CelAction2D to produce much of the animation for Toot, and the team has used the software for a decade between various production studios; in fact, Cloth Cat has the world’s largest installation of CelAction2D today. And the software is used with an extensive local render farm so they can balance demand as needed.

The Toot team at Cloth Cat is about 30 people strong, spread between animation, production, editing, layout, and rigging, and when running at full steam, the group can finish its primary load of work on a full episode each week. But there’s always overlap, which means multiple legs of the project are moving through various departments at any given time.

“We render and review hundreds of shots a day, and the edit is constantly being updated with new material. Layout is, at the same time, producing new material ready to begin animation on the next episodes, so there is always something at each stage of production,” says Rennie. Expectedly, that’s a lot to stay on top of, especially with the team fixed on tight production deadlines.

That’s where ftrack proved so essential, and Cloth Cat Animation started using the software for the first time with the Toot the Tiny Tugboat project. “The main selling point for us with ftrack was that it enabled animators to focus on what they do best—animating—and less on the administration side of production,” asserts Rennie. “This means we can achieve a higher quality level of animation for the same production time, which gives us an edge in a very competitive market.”

He praises much of ftrack’s functionality being “out of the box,” particularly its integration with Deadline, which key members of the team have used for more than 10 years. “As ftrack integrates fully with Deadline, it makes sense to take advantage of its power and use it to automate our rendering process. Also, we use Tweak Software’s RV to review shots and check that the edit points are consistent,” he explains. “It’s always difficult for animators working on individual shots to have a sense of the edit and how their work will fit with other shots they haven’t been involved with.”

Creating an ideal workflow with CelAction meant bringing in a developer to integrate the software before the project got fully underway. However, that process “proved straightforward with the API, and we used a number of custom scripts to allow us to track the versions and the exports of the shots,” says Rennie.

“We use HIERO to import the edits and then build the episode database ready to assign tasks to artists. The web interface then opens CelAction with the correct project file, and then tracks when a render is submitted,” says Rennie. “This allows us to automatically create preview movies for approval and then import back into Hiero, so that we’re always working with the most recent renders in the edit.”

He adds, “The ftrack workflow allows us to very quickly see shots in context and reduce the number of revisions that need to be completed. This means that animators can spend more time finessing a shot, knowing that it will merge with the editor without too many issues.”

Cloth Cat Animation is on track to complete its animation work for Toot the Tiny Tugboat in May, with the series fully finished and delivered by this summer. Beyond the show’s current run in the UK, it’s also been licensed internationally, meaning the studio’s colorful, charmingly rendered work will be seen by kids the world over.

Due to the tight pre­production process, Cloth Cat had to get ftrack integrated and fully operational in a relatively quick time frame to use it on Toot. But now that the team has used ftrack for the bulk of the project span and really seen its benefits, they plan to expand its usage over several future projects. In particular, they intend to dig deeper into the client review features, thus allowing directors and animators to interact directly even when in remote locations.

“A lot of our productions have used spreadsheets and basic tracking in the past, but the investment in ftrack has allowed us to manage our productions with greater efficiency,” Rennie notes. “In particular, removing the administration burden from animators means there are less mistakes and they can spend much more of their day actually animating and receiving clear, dedicated feedback.”

Actions provide a platform for developers to extend ftrack with a Python API that’s native to the system. This allows users to tightly integrate processes like generating reports, automating repetitive tasks, or creating file system structures. Your Actions appear directly in the ftrack web interface, making them seamless and easy to use.

In addition to using Actions to launch CelAction2D (as noted in the article), Cloth Cat Animation also use them to automate common tasks like generating thumbnails and setting up reviews. “We’ve also used Actions to manage the filing systems, so that artists don’t have to dig through layers of versions and folders to find the scene they need to work on,” explains Rennie.

And Actions are context­aware, thanks to the ability to set permissions and roles, so users only see the Actions and functions they need to, and that are most useful at any given time.