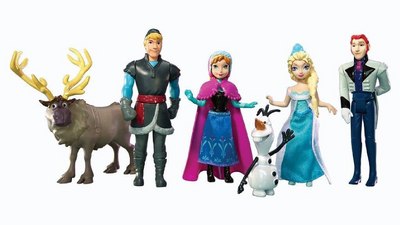 Move over, Barbie. The National Retail Foundation’s annual Holiday Top Toys list has found that one in five parents -- a whopping 20 percent -- plans to buy merchandise from Disney’s Frozen this holiday season. According to a report by Kidscreen, this marks the first year that the iconic Mattel doll (16.8 percent) has not topped the girls toy list in its 11-year history.

Where Frozen ranked first for intended girl purchases, LEGO was once again number one for boys (14.2 percent). According to NRF’s full 2014 Holiday Consumer Intentions and Actions survey, 42 percent of shoppers plan to buy toys as gifts this holiday season.

While Barbie has been the top girls toy for more than a decade, it’s not surprising that Frozen’s Elsa and Anna have edged out the Mattel doll. Major toy companies like Jakks Pacific are seeing Frozen licensed goods boosting quarterly revenues, and Frozen-themed products are also contributing to a bump in licensed toy sales in Europe.

The Holiday Top Toys list is part of the NRF’s 2014 Holiday Consumer Intentions and Actions Survey, which is designed to gauge consumer behavior and shopping trends related to the winter holidays. The survey, conducted November 3-10, polled 6,593 consumers in the U.S.