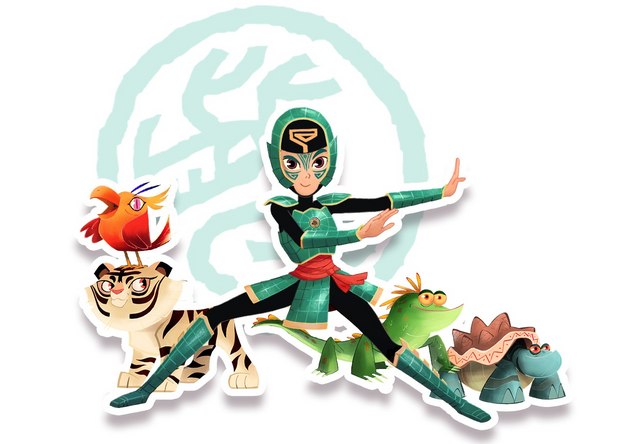 Based on an on an idea by Pongo Kuo, Jade Armor (52 x 11’) is an animated action-comedy series about an unlikely teenage hero with an even unlikelier set of powers…and one awesome high-tech Jade Armor suit that can be a bit unpredictable.

The original concept was developed and presented at Cartoon Forum 2011 with a male lead (think Ferris Bueller inside a futuristic Iron Man-style suit). However, in a uniquely original twist, TeamTO executive producer and founding manager Corinne Kouper decided to flip the tables and re-cast Jade as a female lead, and nurture the girl-power series with a girl-powered creative team -- taking it from Ferris Bueller to…Crouching Tiger.

“With its bubbly, feminine and brave heroine -- descended from a long line of strong women -- Jade Armor is a project very dear to my heart,” Kouper comments. “This modern girl role model is a fun and important one for the kids space and interestingly appeals to boy audiences as well.”

Miller graduated from the Beaux Arts Saint Etienne and the renowned French animation directors graduate school La Poudrière. She joined TeamTO in 2006, moving from first assistant director on the TV series Zoe Kezako to head of graphic development for Babar and the Adventures of Badou. Then in 2007, she became director of Angelo Rules, TeamTO’s original Emmy-nominated IP airing in 100 countries. Further demonstrating her broad capabilities, Miller was then put in charge of artistic direction for TeamTo’s feature film Yellowbird. She is now an integral part of TeamTO’s development team.

Hobbs worked for many years as an actress and scriptwriter in New Zealand and Australia before relocating to England. In the U.K. she moved into script-development, first as vice president, worldwide drama, at Fremantle Media, and then for four years as director of development for Disney Channels EMEA. She now works freelance, both as a development executive and as a scriptwriter.

Both Miller and Hobbs will report to Kouper, who has a vast number of globally renowned series to her credit, including Babar and the Adventures of Badou, Rollie Ollie Pollie, Oscar’s Oasis and Angelo Rules.

Jade Armor is a real action series with a good dose of comedy, all set in a richly picturesque yet contemporary setting. Cho Yu is a modern day girl who splits her busy life between school and an animal shelter. The last in a long line of strong and powerful women, her life takes an unexpected turn when she receives a mystical suit of jade armor. Together with her best friends Yang and Lin and the magical Beasticons, Cho Yu battles for justice.

TeamTO will be presenting a brand new TV Bible and trailer at Kidscreen 2016, with delivery planned for 2018.

With production facilities in Paris and Bourg-lès-Valence, TeamTO is a globally renowned CGI animation studio behind some of the most visually striking series in the market from the industry’s top studios, including PJ Masks (eOne), Sofia the First (Disney), Rabbids Invasion (Ubisoft), Pacman (Bandai), Babar and the Adventures of Badou (Nelvana/TeamTO), and Calimero (Gaumont).