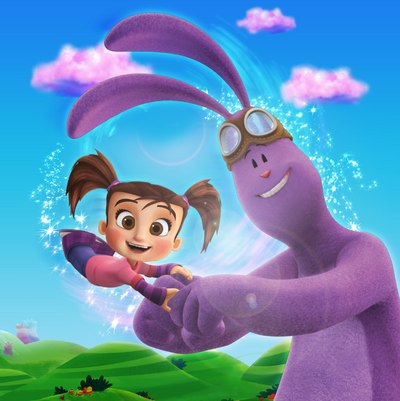 FremantleMedia Kids & Family Entertainment (FMKFE) has greenlit the second season of the highly-rated preschool series, Kate & Mim-Mim. Series two is due to launch on Disney Junior US and will then air globally in late 2015. The 23 x 22’ series is currently in pre-production and will include two themed seasonal specials.

A number of key consumer products partners have also signed FMKFE’s expanding new pre-school girls’ property. Leading U.S.-based toy company Just Play is on board as global master toy partner and will initially focus on the development of plush, dolls, figure packs, and role play products. The initial launch is scheduled in North America and the U.K. for spring 2016, followed by a wider international retail roll out in line with the second series.

Penguin Young Readers, a division of Penguin Random House, has signed as the North American publishing partner for the brand. Their initial line will launch in fall 2016 and will include storybooks, levelled readers, e-books and doodle, activity and sticker books.

Produced by DHX Media, in association with FremantleMedia and launched last year to immediately strong ratings on CBeebies in the UK,  Disney Junior in the U.S. and Super RTL in Germany, Kate & Mim-Mim has proved a massive hit with young viewers across the world. FMKFE has now sold the series to 80 international territories including Clan in Spain, DR in Denmark, SVT in Sweden, Tiji in France and Okto in Singapore.

A first DVD collection has launched in the U.K., alongside a magazine special from Immediate Media. Acronym recently launched the first Kate & Mim-Mim English-language app and Universal has just released their first DVDs in Germany.

“We are delighted to be collaborating with Just Play and Penguin Young Readers on Kate & Mim-Mim,” said Andrea Brent, Vice President Licensing & Merchandising FremantleMedia North America. “They are the perfect partners to help translate this fantastically imaginative and highly toyetic series into a range of creative toys and books that will engage and entertain young fans across the globe.”

“Kate and Mim-Mim's colorful cast of characters and awe-inspiring environments will make for an engaging line of toys,” said Geoffrey Greenberg, Co-President of Just Play. “We are thrilled to be the toy partner who gets to bring this enchanting series to life through products that encourage imaginative play.”

Aimed at 2-5 year olds, and inspired by a real life girl and her toy, Kate & Mim-Mim follows the adventures of Kate, an imaginative little girl who, together with her toy rabbit Mim-Mim, travels to the fantasy world of Mimiloo where Mim-Mim comes alive as a larger-than-life big bunny buddy. In each episode, Kate and Mim-Mim and their group of loveable friends discover exciting new places and set off on adventures, all in the hope of solving a puzzling problem Kate has encountered in the real world. The series was created by award winning husband and wife team Scott and Julie Stewart and produced by DHX Media in association with FremantleMedia. FremantleMedia is the worldwide distributor of the series outside of Canada.