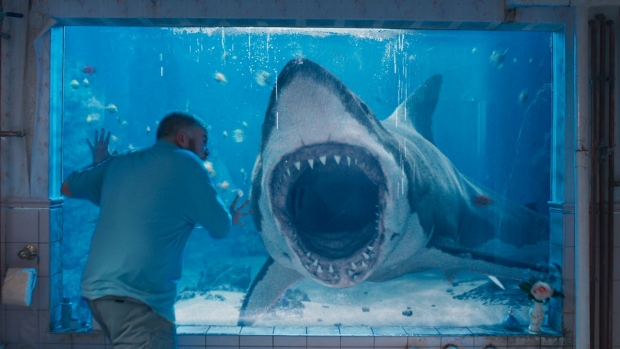 Creative studio Freefolk’s VFX and post-production skills were put to the test on a surreal new bathroom sequence in krow’s latest campaign for Toolstation, directed by Guy Manwaring for Merman. Toolstation, one of Britain’s fastest growing suppliers of tools, accessories, and building supplies, launched the new campaign earlier this month.

The campaign, which includes TV, online video, radio, outdoor and digital advertising, launched with a 30-second TV spot showing a plumber arriving at a call out to an ordinary looking house on an ordinary looking street. He is shown to the bathroom, where there is a leaky wall-to-wall aquarium housing an unexpected resident – a great white shark. Meeting the DIY challenge nonchalantly, the plumber is swiftly equipped with everything he needs for the job as the voiceover comments, “It’s a good job we do more than just tools.”

As the plumber is shown in the bathroom, we see a leaky wall-to-wall aquarium housing an unexpected resident – a fully 3D Great White shark, met with nonchalance by the plumber.

Freefolk was led by Creative Director, Jason Watts, EP Fi Kilroe, Post Producer Laura Ricketts and Head of 3D Harin Harani with color by Paul Harrison. The studio was tasked with transforming the expanse behind the customer's bathroom-aquarium glass into an environment populated with a rocky seafloor, dense schools of tropical fish, and the great white shark. The tank, fish, and water were fully CG with additional 2D water elements.

The team had to simulate fish behavior for each shot, finessing a detailed shark asset which could be animated to maneuver around the environment and come up to the glass for its ferocious closeup. The CG was lit using volumetrics to achieve the soft, low visibility look of seawater, with further control in comp to marry it to the plate and find the ideal amount of visibility Freefolk wanted in the further depths.

The work involved was also complex from a 2D perspective, Bradley Cocksedge, 2D Artist, talking about the compositing hurdles, noted, “We had a range of different plate combinations and 3D renders to deal with, each shot had to be setup, so each adjustment was consistent and there were no sudden changes in the look and feel of the fish tank. It was important to really nail the depth of the tank, so it gave both the sudden impact of the shark hitting the glass from the depth as well as showing off the vast space seen in the first shot we see of the tank."