Reel FX’s new app Baby Turkey Trouble, based on the animated feature Free Birds, reaches a landmark 100,000 downloads in less than a month. 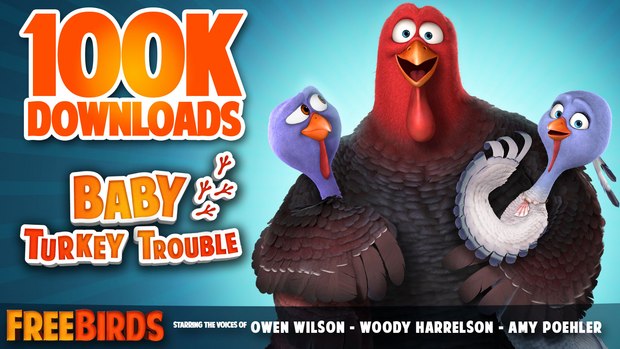 The lively and playful mobile app from the recent animated feature Free Birds, Baby Turkey Trouble, has reached a landmark of over 100,000 downloads in less than a month. The game was originally released on November 11th, during the opening week of the film, which has grossed nearly $54 million in domestic sales to date. The game features voices of Free Birds stars Owen Wilson, Woody Harrelson, and Amy Poehler. When users activate the time traveling egg S.T.E.V.E., they are able hear the voice of George Takei, who also stars in the film.

The game was created by Reel FX, the animation studio that created the movie.

“The game has received over 200 4-Star Ratings on the Apple Store,” says Dan Ferguson, Director of Interactive Digital at Reel FX. “When people take the time to give it such high ratings, we know we’ve created something that resonates with our audience.”

Reel FX launched their interactive digital division with the release of this app to support the movie. They are currently working on new experiences for their own movie properties and commercial clients.