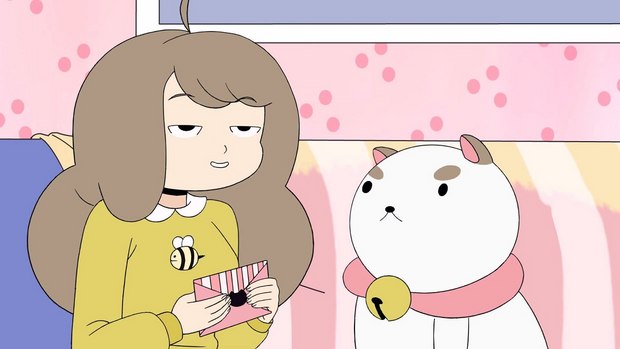 Bee & PuppyCat follows Bee, an out-of-work twenty-something, who has a life-changing collision with a mysterious creature that she refers to as PuppyCat, because she is not sure if it is a dog, cat, or both.  Between space and time, Bee & PuppyCat take intergalactic temping gigs to pay another month’s rent, and embark on adventures that include betrayal, intrigue, and magical transformations. As a “traditionally animated” series, all elements of Bee & PuppyCat are drawn by hand. The new season will feature 10 six-minute episodes with several animation and YouTube stars providing guest voices, including Hannah Hart (My Drunk Kitchen, I Heart Harto), Stephen Root (The Office, Finding Nemo) and Kent Osborne (Adventure Time, SpongeBob SquarePants).

With its distinct look and feel, stylistically unlike anything currently seen on the animation landscape, and outlandishly original characters and storytelling, Bee & PuppyCat is poised to become the series that defines a new breed of animation. The initial short struck a chord outside the traditional animation fanbase, with a huge female audience gravitating to the content along with a strong male demographic.  The appeal has also sparked an avid fan following of Bee & PuppyCat cosplayers who show up in droves at comic conventions, and drive sold-out merchandising lines of t-shirts, comic books and plush.  Amazing for a property that to date exists as just a two-part, 10-minute short!

“Bee & PuppyCat is one of those series that comes along only once in a long while,” said Fred Seibert, head of Frederator Studios. “It’s such a singular vision and we couldn’t be more proud of the direction it’s taken. Natasha is a distinctive voice in animation and we can’t wait for fans to see what she’s done with this first season of episodes.  There is no doubt in my mind that Bee & PuppyCat will establish itself as a true defining moment in animation.”

“I'm super excited to finally put more Bee & PuppyCat out in the world,” added Natasha Allegri. “The response from fans has already been so humbling and inspiring. I just hope this series satisfies them as much as it does me.”

Frederator Studios raised  $872,133 in funding from a Kickstarter.com campaign backed by more than 18,000 people to produce the first season of episodes.  The campaign exceeded its goal of $600,000 and now ranks as Kickstarters’s most funded animation project and the fourth biggest Video and Film campaigns to date – alongside the Veronica Mars movie, projects from Spike Lee and Zach Braff, and ahead of the digital sensation Video Game High School 2.

When Bee & PuppyCat debuts on Channel Frederator Network it will add to the online destination’s dominance in the animation space.  With the recent signing of new channels such as The Animation Workshop, Channel Frederator now boasts 880 channels in its networks representing popular animated programming from across the globe.

Animation luminary Fred Seibert created Channel Frederator Network with a “Declaration of Cartoon Independents” as its foundation, making it the home to creative and disparate visions for all styles of animators.  Designed as a collaborative forum through which independent voices can be heard, seen, and supported by one of the foremost pioneers in animation, Seibert himself, Channel Frederator Network is the premier network for animators.  The network continues to attract red hot animated channels including David Firth’s Salad Fingers, FlashFacilitoChips, FlyingPanda1990, Sam Green Media, and RageNineteen which just signed on with the network this past summer.