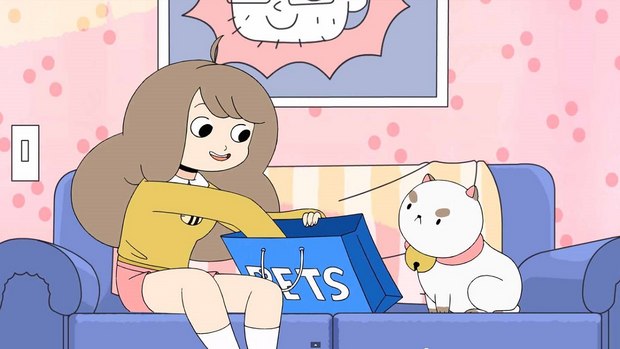 Everyone’s abuzz about one little bee-rific series!  The highly anticipated debut of Bee & Puppycat on Channel Frederator’s Cartoon Hangover has resulted in both critical and mass acclaim with the first two episodes accruing more than 1.6 million views in under 72 hours.  Created by Adventure Time artist Natasha Allegri, one of the freshest new voices in animation, and produced by Frederator Studios, the studio headed by animation icon Fred Seibert (Adventure Time, The Fairly OddParents, Powerpuff Girls), Bee & Puppycat  was a “must list” pick by Entertainment Weekly and a top “TV on the Web” pick by USA Today.  Cartoon Hangover originally debuted Bee & Puppycat as a 2-part 10-minute short in July 2013, which went on to amass more than 7 million views (part 1 and 2 combined) and inspire a record breaking Kickstarter campaign that raised nearly $900,000 to fund the first season of the hit show.  The successful debut follows what has been another amazing month for Channel Frederator Network, which added 607,000 new subscribers and 158 new animation channels including JessTheDragoon and Mamshmam in October.

Fred Seibert, head of Frederator Studios, said, “It’s clear from the momentum behind the Bee & Puppycat launch that we are witnessing a defining moment in animation.  Here is a series that has struck a cord outside the traditional animation fan base, attracting a huge female audience alongside male viewers.  It’s the type of series we would have never seen on traditional broadcast previously, yet given its wide appeal, it might just end up being a game changer for the animation industry.”

With its distinct look and feel, stylistically unlike anything currently seen on the animation landscape, and outlandishly original characters and storytelling, Bee & Puppycat is poised to become the series that defines a new breed of animation.  With women between the ages of 18-24 comprising more than 60 percent of the program’s viewership, the series is clearly attracting a whole new audience to the realm of animated programming.   Bee & Puppycat  follows Bee, an out-of-work twenty-something, who has a life changing collision with a mysterious creature that she refers to as Puppycat, because she is not sure if it is a dog, cat, or both.  Between space and time, Bee & Puppycat take intergalactic temping gigs to pay another month’s rent, and embark on adventures that include betrayal, intrigue, and magical transformations.  As a “traditionally animated” series, all elements of Bee & Puppycat are drawn by hand.  The new season  will feature 10-six minute episodes with several animation and YouTube stars providing guest voices including  Hannah Hart (My Drunk Kitchen, I Heart Harto), Stephen Root (The Office, Finding Nemo), Kent Osborne (Adventure Time, SpongeBob SquarePants).

Bee & Puppycat made its seminal debut as Channel Frederator Network continued to expand the online destination’s  dominance in the animation space.  With the signing of new channels in October such as JessTheDragoon, Mamshman, Mashed, Grickle, and Grobisam, Channel Frederator now boasts 1,048 channels in its networks representing popular animated programming across the globe, 510 million views of their content to date, and 13 million subscribers.  Animation luminary Fred Seibert created Channel Frederator Network with a “Declaration of Cartoon Independents” as its foundation, making it the home to creative and disparate visions for all styles of animators.  Designed as a collaborative forum through which independent voices can be heard, seen, and supported by one of the foremost pioneers in animation, Seibert himself, Channel Frederator Network is the premier network for animators.