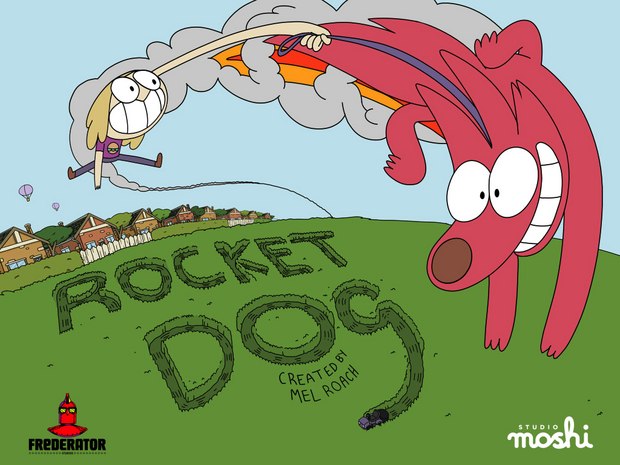 New York, NY -- A screwball, rocket-powered dog will soon be visiting a TV screen near you! Frederator Studios and Studio Moshi, one of Australia's premiere independent design and animation studios, announced they have entered a co-production agreement to bring popular online short Rocket Dog to television globally.  The kids TV series, inspired by a 5-minute short created by Australian animator Mel Roach, garnered 1.5 million views since launching on Channel Frederator Network’s Cartoon Hangover in 2013, leading the way for series development.  Through the agreement, Frederator Studios will manage TV distribution in North America while Studio Moshi will handle distribution in all other territories.  The co-production deal marks the first content from Frederator Studios’ Too Cool! Cartoons incubator, which also birthed hit online series Bee & PuppyCat, to be developed for traditional international broadcast.

Rocket Dog is the classic tale of a boy, his maniacal, rocket-powered dog, and their mayhem-filled adventures.  Frederator Studios and Studio Moshi are developing 52 11-minute episodes for season one of the series, targeted to kids ages 6 to 11.  Australian Animator Mel Roach was first discovered by Frederator Studios via her wildly popular Tumblr blog which showcases her sketches and highly-original animated gifs.  Roach was asked to pitch a short to Frederator for its Too Cool! Cartoons incubator. The rest is history.

The co-produced series marks the first show from the Frederator Studios’ Too Cool! Cartoons incubator to be primed for international television distribution, tying back to the studio’s strategy to increase its global reach through both acquiring and distributing top-notch content.  Most recently, Channel Frederator Network, also part of Frederator Inc., acquired the worldwide rights to distribute the English-language version of the celebrated Chilean online animated series Fin Punch.  The series debuted on Frederator’s incredibly popular Cartoon Hangover YouTube channel earlier this month.

Fred Seibert, founder of Frederator Studios, said, “"It's a new golden age in animation, when Frederator can discover a world class creator like Mel Roach from an animated GIF, and produce a film with global appeal. And then, to collaborate with a world class partner like Studio Moshi to bring the series to television supports our expansion from TV to the online universe." ”

Andrew Davies, CEO, Studio Moshi said, “Frederator Studios is a powerhouse in the animation world and we truly see a lot of potential in Mel Roach and her new series Rocket Dog.  We are sure that Rocket Dog will have global appeal and we look forward to working with Mel and Frederator to bring it to broadcast.”

Seibert and his team at Frederator Studios are leading the way in online animation—successfully introducing new talent and fresh stories beyond the expected viewing demographics.  Cartoon Hangover’s Too Cool! Cartoons incubator is credited with hit series Bee & PuppyCat from Natasha Allegri—which debuted to millions of viewers on Cartoon Hangover late last year and quickly became one of the most popular online animated series in 2014.  Building on this strategy, Frederator Studios formed an incubator late last year with SONY Pictures Animation called GO! Cartoons that will fund 12 five-minute animated shorts to premiere on Cartoon Hangover.