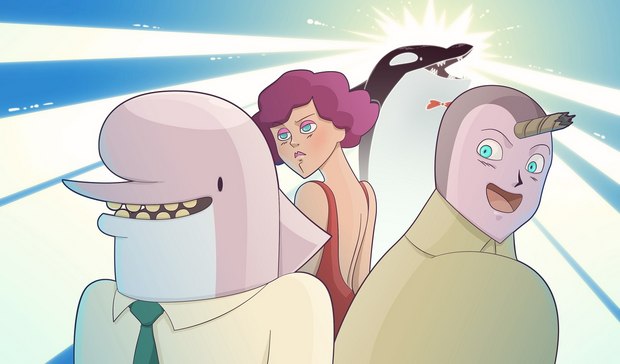 New York, NY -- Channel Frederator Network is one step closer to global domination in the online animation space with its distribution of Chilean-based Marmota Studio’s 18-part series Fin Punch!. In a first for Channel Frederator Network, the company will translate and distribute a foreign-language animated series for an English-speaking audience on its Cartoon Hangover channel kick-starting a strategy that will look further into global markets for the hottest online animated series. Fin Punch! is a series set in an alternate universe where marine mammals and humans live together on land and conveys the tone of Channel Frederator Network’s irreverent, creator-driven animation. The series will debut today with two episodes airing weekly thereafter.

Channel Frederator Network acquired the worldwide rights to distribute an English-language version of the series. The focus will be to build its presence through the network’s powerful reach with the potential to produce future episodes with Marmota Studio. Translating existing online content for an English speaking audience opens the door to hundreds of hours of animated creations from across the globe.

“There are no borders that define the best animation in the world and we will continue to search across the globe for programming that we think will appeal to our audience,” said Fred Seibert, head of Frederator Studios. “The approach we’re taking with Fin Punch! is based off of a standard broadcast distribution strategy – something that I think can work well for our network as we move forward.”

Fin Punch! follows an odd, charismatic dolphin and narwhal whose conflicting philosophies interfere with their attempts to conquer humankind. The series was created by Matías Latorre and is produced by Marmota Studio.

Latorre had this to say of the partnership, “I can't believe that Personas Cetaceas is going to be on Cartoon Hangover. Two years ago I started this series with no expectations, and now our work will be seen by millions! We're grateful to Frederator, because they not only guided us on YouTube matters, but also have shared their experiences as a big animation studio. To us, that's priceless. Since we debuted on the network we've grown as a YouTube channel and as an independent animation studio. It's been so awesome!”

The addition of Fin Punch! reinforces Channel Frederator Network’s position as the undisputed digital leader in delivering the world’s freshest and most cutting-edge line up of animated content with a combined subscriber base of 14,850,000 and 719 million views of content to date.

Animation luminary Fred Seibert created Channel Frederator Network with a “Declaration of Cartoon Independents” as its foundation, making it the home to creative and disparate visions for all styles of animators.  Designed as a collaborative forum through which independent voices can be heard, seen, and supported by one of the foremost pioneers in animation, Seibert himself, Channel Frederator Network is the premiere network for animators.  The network continues to attract red hot animated channels including David Firth’s Salad Fingers, FlashFacilitoChips, Domics, FlyingPanda1990, Sam Green Media, Cyber Toons, and Lee Hardcastle.