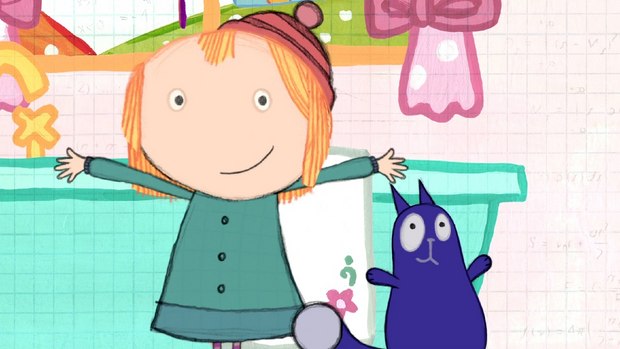 PITTSBURGH, PA -- The Fred Rogers Company, the nonprofit educational media company, has earned a $3 million grant from the National Science Foundation (NSF) to support Peg + Cat, its multiple Emmy Award-winning animated math series on PBS KIDS. The grant renews NSF’s support for the series and related outreach programs aimed at getting young children excited about math, helping them develop problem-solving skills and encouraging teachers and parents to embrace math and approach it in a way that makes learning fun for children. The company is among only 10% of applicants to NSF’s Advancing Informal STEM Learning Program to receive funding.

“We are grateful to NSF and to our partners for this wonderful opportunity,” said William H. Isler, president of The Fred Rogers Company. “We are proud to be engaging millions of children and helping them get excited about learning math with a little help from Peg + Cat.”

“The Fred Rogers Company’s efforts will make an important contribution, not only to informal learning, but also to interdisciplinary research,” said Sandra Welch, Program Director at NSF. “Supporting this type of programming, which yields valuable insights about how to engage young children and their teachers, furthers NSF’s goal of encouraging STEM learning at an early age.”

NSF first supported The Fred Rogers Company in 2013 with a $3 million grant toward production of the first season of Peg + Cat and related outreach with parents and teachers. The second NSF grant will support production of 25 new episodes along with complementary digital games and apps. Season two also continues to feature Ramone, Peg’s mentor and role model. Their relationship shows younger children how to ask for help when they need it and older children how to lend a hand.

The NSF grant also supports educational outreach projects for hundreds of children and teachers in Pittsburgh. The Carnegie Science Center will offer a Peg + Cat camp in summer 2016. In addition, the grant launches a new professional development program in partnership with the Pittsburgh Association for the Education of Young Children and St. Vincent College. This effort will help early childhood educators identify and enrich the ways they already support children’s learning and help them use media to reflect on and cultivate this aspect of their work. The grant also facilitates research in partnership with the University of Pittsburgh’s Department of Psychology in Education. The study will explore the relationships among media and technology, responsive teacher-child interactions, children’s social-emotional skills, and engagement and interest in math.

The project will be led by a team of experts in children’s media and early learning, including Mallary Swartz and Paul Siefken, who direct research and media production, respectively, at The Fred Rogers Company; Junlei Li, who co-directs the Fred Rogers Center for Early Learning and Children’s Media at St. Vincent; and Shannon Wanless, who studies children’s social-emotional and self-regulatory development at the University of Pittsburgh’s School of Education.

Peg + Cat episodes air on PBS KIDS and learning games and apps are here. The program has attracted a large and growing audience across both broadcast and digital platforms, incorporating a perfect combination of “girl-power” and “brain-power.” Peg, the show’s star, was recognized by Common Sense Media as one of TV’s Best Role Models of 2014. The series has been honored with four Emmys, including “Outstanding Pre-School Children’s Animated Program.” Peg + Cat has won four Kidscreen awards as well as a Parents’ Choice Gold Award and the Peg + Cat Big Gig App has earned a Parents’ Choice Silver Honor.

Peg + Cat is co-created and executive produced by Jennifer Oxley (Little Bill, The Wonder Pets!) and Billy Aronson (Rent, Postcards from Buster) and produced by The Fred Rogers Company for PBS KIDS. Kevin Morrison of The Fred Rogers Company and Vince Commisso of production partner 9 Story Media Group also serve as executive producers. 9 Story, which distributes the popular series and manages licensing for the brand internationally, has secured distribution in more than 30 countries, providing even more opportunities for children around the world to tune in to the upbeat series. HiHat Media leads U.S. licensing initiatives for the brand.