The Fred Rogers Company Debuts ‘Through the Woods’

Marking the company’s first foray into original programming for mobile, new series of animated shorts was made in partnership with Houghton Mifflin Harcourt’s Curious World. 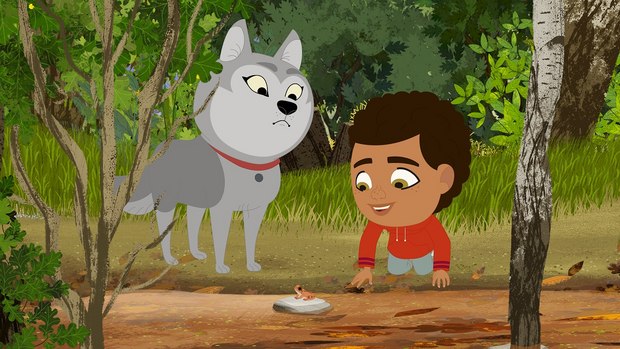 NEW YORK -- Houghton Mifflin Harcourt, home of early learning subscription service Curious World, and The Fred Rogers Company, the innovative and award-winning children’s entertainment company behind some of the nation’s most beloved hit series, including Daniel Tiger’s Neighborhood, Peg +Cat, and Odd Squad, have partnered to launch original short-form videos for kids and families within the content service. Marking its first foray into original programming for mobile, The Fred Rogers Company debuts Through the Woods, a new series of animated shorts on Curious World.

Each episode of Through the Woods follows a young boy named Rider and his beloved dog Wolfie as they venture into their backyard woods in search of adventures. As they meet the animals that live there, they observe, ask questions, and ultimately inspire viewers to make discoveries of their own in their neighborhoods and communities.

A vibrantly-animated new production, Through the Woods nurtures respect for nature and models a variety of essential lessons for kids and families, from the importance of self-guided play and curiosity to the power that loving relationships (with family, friends and pets!) have to support a child’s blooming confidence and sense of self.

“I cannot overstate how thrilled we are to be working with the amazing team at The Fred Rogers Company,” said CJ Kettler, EVP and Chief of Consumer Brands and Strategy, HMH. “Curious World’s philosophy aligns perfectly with The Fred Rogers Company’s commitment to creating kids’ media that families can trust to inspire off-screen learning and support an interest in life science and nature. Our viewers are going to love joining Rider and Wolfie as they explore the natural world.”

“As an innovative, mobile content service, Curious World is ideal for showcasing Rider’s and Wolfie’s outdoor adventures,” said Paul Siefken, President and CEO of The Fred Rogers Company. “Viewers can reenact these familiar and relatable encounters with nature in their own neighborhoods. At the same time, the shorts display key early learning skills like self-regulation, persistence and inquiry – as well as sharing new experiences with loving parents and grandparents. The Fred Rogers Company recognizes that it’s important for positive, developmental content to be everywhere kids and families are today.”

Launched in 2015, Curious World’s mobile platform provides more than 1,200 videos of engaging kids’ content tied to key learning areas – all housed within a safe, trusted digital environment. From iconic HMH characters like Curious George to new friends like Rider and his family in Through the Woods, Curious World curates the best kids’ content, including original IP offerings and licensed programming from leading children’s media production companies, as well as original games and celebrated children’s books that can be accessed by users anytime, anywhere on iPhone, iPad or AppleTV.

The Fred Rogers Company has won countless awards, including 17 Emmys, for its quality children’s series on PBS KIDS (Mister Rogers’ Neighborhood, Daniel Tiger’s Neighborhood, Peg + Cat, and Odd Squad) as well as its leadership in the kids’ media space, building on the enduring legacy of Fred Rogers, a true pioneer of kids’ TV.

Through the Woods is a production of The Fred Rogers Company.