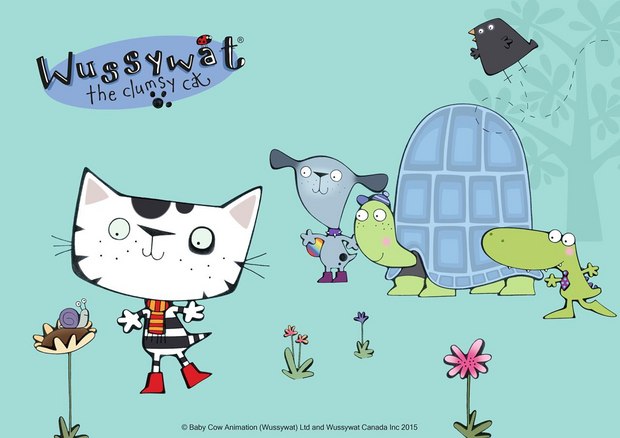 Think children’s animation is easy? Think again. Production on Baby Cow Animation’s Wussywat the Clumsy Cat was spread across four cities and two continents -- it was Frankie that bridged the Atlantic divide and ensured Wussywat’s message was delivered loud and clear.

Wussywat the Clumsy Cat is winsome children’s television at its finest. The show’s titular hero is an inquisitive yet somewhat graceless feline. As the famous proverb insists, this particular cat’s curious nature often leads him to trouble, causing many a mishap as he explores the seemingly infinite world of The Garden.

Wussywat’s cloddish nature might cause a plethora of problems, but in the end he always emerges from the experience with a wider understanding of the world -- and that’s the point. Wussywat the Clumsy Cat’s message to its young audience is that you shouldn’t be afraid to try out new things even if it means risking failure in the process. Here, failure isn’t negative -- it’s all part of the learning process. Wussywat tells us that children can’t always be protected from failure, and its “have-a-go” mindset -- not the final outcome -- that’s the real personal achievement.

It’s a meaningful message, broadcast simply through the medium of 2D animation created via a partnership between Baby Cow Animation in London and Smiley Guy Studios in Toronto.

That geographical distance meant that this production wasn’t working within the same physical space -- it was a truly global production, with a team of 50 writers, storyboarders, animators, voice artists, producers and directors working in tandem, with an entire ocean and a five-hour time difference cutting through the workflow.

In order to ensure that both teams remained in sync -- and that the core message of Wussywat remained intact through each of its five-minute episodes -- Cospective’s cloud- and web-based review solution Frankie was brought into play.

The Challenge of 2D Animation Simon Quinn, producer at Baby Cow, has been working in stop-motion animation for over 25 years, having previously worked on Wes Anderson’s Fantastic Mr. Fox and Tim Burton’s Frankenweenie. Wussywat was his first experience in children’s 2D animation, which meant an entirely different pipeline to grow accustomed to.

Wussywat also happened to be Baby Cow’s first ever pre-school animation, with the studio -- formed in 1999 by comedy creators Steve Coogan and Henry Normal -- having previously created animation for an older audience on projects such as Horrible Histories and Have I Got News for You.

“It was a challenge, as the project was new for us, and it was being created across the globe,” Quinn says. “Baby Cow acted as the central hub for production, but there were elements of the show being created in places dotted all over the globe. Scripts were written all over the U.K.; designs were done in Wimbledon; [director] Tom Edgar and the storyboard team were based in Cardiff; voice recordings took place at Fitzrovia Sound Post in the heart of London; and animation and music/dub were done in Toronto, Canada.”

For Quinn, as producer, this presented more than a little challenge. “It’s my job to schedule the various elements, shepherd the various teams and heads of departments through the schedule, make them aware of the deadlines and milestones and try to coordinate between all the working parties -- all while keeping the whole show on track, on budget and working with the investors and CBeebies our broadcaster to make sure we are keeping everyone happy,” he says.

This was would be a difficult task in and of itself, even before you considered the round-the-world production pipeline. “For each episode, design would start with pencil and paper in the traditional way,” Quinn explains. “Those drawings are then scanned into Photoshop and sent to Canada where the assets are converted to Flash for the animators. We also use After Effects and edit in Pro Tools before outputting the data to Base Light, where The Farm in London finalize the picture before delivering to the BBC on tape.”

With 50 different people involved in the project at any one time and 52 five-minute episodes being worked on simultaneously at various stages of completion, the production was something of a juggling act.

“Distance has always been the key worry, with the sheer geographical spread of the crew across the UK and Canada, and the different time zones meaning very long hours,” says Quinn. “It’s much easier to communicate when everyone is in the same building, so it was a demanding task in front of us. Thankfully, using Frankie combined with Skype enabled us to keep in touch, while also keeping tabs on what was decided by who and when -- all without having to leave the comfort of a web browser.”

Discovering the Power of Frankie Tom Edgar of Barneyloon films was brought on to the Wussywat project as director. Being based in Cardiff, Wales, it was important that he stayed in the loop with the global team, ensuring his vision for the project was carried out as intended. It was the first time Tom had used Frankie -- and it is unlikely to be his last.

“I cannot fathom how we could possibly have lead this production without Frankie! It’s now so fundamentally integrated into the way we work, I reach for it before an email as a response tool,” Edgar says. “With the production team on Wussywat so spread out across the globe, it was imperative, despite any time zone differences, that we could have highly specific questions answered during a single sitting. Being able to conduct virtual video reviews, during which frame-accurate decisions could be made with the whole team ‘in the room’, was unthinkably useful. It’s become completely indispensable to me.”

In previous scenarios, before he discovered Frankie, Edgar believes that he would not have been able to work in the same streamlined, remote fashion as he is able to now. “I would either have had to travel extensively to wherever the project was, or indeed relocate to the location with or without the family!” he says. “This would inevitably cost a great deal of time, money and inconvenience! If any material had to be approved remotely that would entail an enormous email trail and cross referenced phone calls over images and video stored on Cloud share sites or worse, couriered across the country.

“Frankie means we don’t have to worry about any of that,” Edgar continues. “You can have multiple users across the globe interacting with the same information at the same time. The fact that each individual can watch, step through, mark and annotate clips -- and then collate all of the episode notes with Frankie’s amazing self-generating PDF function -- removes a huge margin for error.”

From Script to Screen When working on the Wussywat project, Quinn, Edgar and the rest of the team would carry out Frankie sessions three-four times a week. These meetings would comprise different members of staff depending on what needed to be discussed in that session.

“The sessions could include any number of people from across the world,” begins Edgar. “Sometimes the sessions would include myself, Quinn and a script writer to discuss animatics or story issues; sometimes they would be with the animation supervisor and project leader in Canada; sometimes with a storyboarder or editor to discuss animatic board fixes; and sometimes with animators to discuss PDF notes and briefings. My role as director required me to keep in constant contact with all the various members of the team, wherever they were, to manage their workflow and review their output closely.” Production of an episode would usually begin with the scripts being turned in storyboards. Next came the animatic: taking the still images from the storyboard and setting them to dialogue on a timeline, giving the show creators a working length for the episode and a guide for the animators on both shot length and action.

“From here I would often send the animatic to the storyboarder via Frankie to see what changes were required and how the stills transformed with the timings,” Edgar recounts. “This is the part of production where I tended to use Frankie the most, as it’s so much simpler to discuss moving images and synchronised sound when everyone involved is watching the same thing. Decisions as complex as scene planning changes, re-boards or re-edits and continuity tracking can all be done in a single session -- and all of these decisions can be noted on both the video presentation itself and the email-able PDF generated after the session.”

Once a working animatic was been established, Edgar would need to brief the animators. “Normally I would conduct a sit down presentation with all the team in one room, but with Frankie it doesn’t matter where in the world you physically are,” Edgar says. “As long as you have an internet connection you can sync the animatic to everyone’s screen. Then, while the animators are working, they can bring me any revisions, changes, queries or questions and it’s simply a matter of linking it onto a Frankie session -- it’s as good as looking over somebody’s shoulder! That’s why Frankie was in use from the very first concept designs all the way to final approvals.”

Post-Production Without the Hassle

A project on the global scale of Wussywat the Clumsy Cat, created without the aid of a real-time video review tool such as Frankie, simply wouldn’t be possible to the same degree of efficiency and speed. Telephone calls, FTP sites, long download times and a constant back-and-forth in email communication might be one solution, but the production process will never match the speed and efficiency of one that incorporates the instant, browser-based communication enabled by Frankie.

“It’s just a really easy, intuitive tool, and I don’t know where I’d be without it,” says Edgar. “Using it is as simple as uploading a video to YouTube or any other platform. Once you’ve got your project loaded, it’s child's play to share, add drawings, text or direction live to the image, or even in advance of a future presentation. Once you’re done, the project remains online, available for as long as you want, and a PDF version of all the notes is saved for easy reference even when you're without an internet connection.

“And of course, because it’s browser-based, I can do all of this from anywhere, as long as I have my laptop or tablet,” Edgar continues. “That means I can be at home, in London collaborating with colleagues or on a train between locations, and I’ll be available. I can be preparing a brief, reading other people’s comments or making my own notes on the episodes as they are sent to me.”

From never using it at all to it becoming an integral part of his workflow, Edgar is a true Frankie convert, and strongly recommends that any post-production studios currently operating without the solution should rethink their strategy. Like Wussywat, production is all about the taking part; it’s about learning from your mistakes and ensuring you communicate potential issues before they can become a problem, and Frankie is an invaluable element in that process.

“If a studio has a need to share visual ideas between remote locations, then Frankie is the best tool that I’ve come across, whether for video or still images,” concludes Edgar. “With the international marketplace expanding globally and embracing remote workflows, I cannot believe that anyone working in a creative industry such as ours could manage without it!”