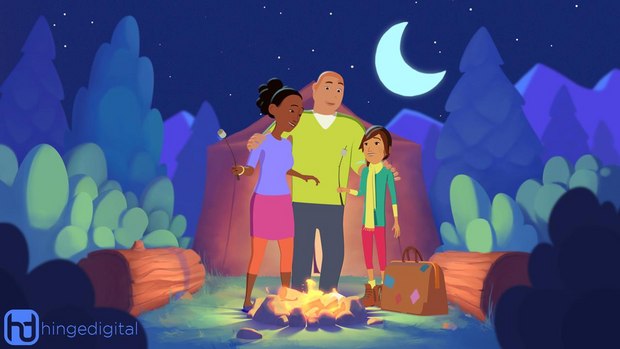 Hinge Digital has amassed an impressive roster of clients since opening up shop in Portland, Oregon in 2009. In just a few short years, the team has worked on ad campaigns and other prominent content for massive brands such as Microsoft, Adidas, Electronic Arts and Dunkin Donuts, to name just a few.

However, the studio took on a very different kind of project with Suitcase, a 30-second public service announcement created for AdoptUSKids, Ad Council and the U.S. Department of Health and Human Services. It's a powerful reminder that while parents may not be perfect in all moments, they can provide the perfect, loving home for a child in need.

Hinge conceptualized, wrote, designed, and animated the clip, but with so many partners' hands in the mix across the country, the studio needed something to keep everyone on the same page as the project sprang to life. Frankie proved to be that essential tool, as its web-based video review functionality allowed remote parties to view the work in real-time and collaborate with ease.

Suitcase shares a succinct yet powerful and meaningful story about the love and stability provided by an adoptive family. In the clip we see a young girl who has been bounced between foster homes growing accustomed to living out of a suitcase. But when she's given a permanent home she finds a new use for that suitcase, and appreciates her adoptive parents even if they make silly mistakes here or there.

It's a moving message: a half-minute cartoon tearjerker, really, and one that showcases Hinge Digital’s talents in creating an effective campaign from scratch. It was produced to mark the 10th anniversary of AdoptUSKids, an important initiative that helps place foster children into adoptive homes in the United States.

“It was important to use emotional storytelling and illustrative design to tell this story, along with the software magic of Maya and NUKE to create the dynamic visual narrative,” says director Alex Tysowsky, whose nearly 20-year career includes animation for blockbuster films such as The Matrix and Spider-Man 2. He had a team of eight focused on the PSA, which was in production for about six weeks.

“We wanted to create a spot with a uniquely engaging look that combined toon-shaded CG characters and watercolor backgrounds,” he explains. “Once the concept designs were approved, we built the 3D assets to match the look and feel of the artwork. The fun part was animating and bringing the characters to life.”

With approvals needed from both creative and non-creative individuals at the client companies -- all of whom were in various locations across the United States -- Hinge Digital needed a solution that would allow for an effective review process. Hinge had previously used cineSync, and “enjoyed the power and flexibility.” However, this time the clients needed something that was slightly more accessible.

That's where Frankie came in. Tysowsky calls Frankie “the perfect blend of cineSync's power with web-based ease of use,” and says it allowed his team to overcome the distance between themselves and the client companies. With Frankie, remote parties can be easily invited into the review session, and everyone can quickly share their comments and notes. It makes everyone feel like part of the active process.

“Once we had everyone on a conference line and connected to Frankie, they were all looking at the same thing,” Tysowsky explains. “With five people in five different locations, communication about something visual can be a bit of a challenge. But with the markup tools Frankie provides, everyone can see what we’re talking about.” As with any advertisement, there's a level of care involved, and a need for client approval and guidance. But particularly with a project like this, which is focused on the welfare of children and a very sensitive, emotional subject, it's crucial that everyone is on point when it comes to honing the message and the work. “We feel the investment in Frankie far outweighs the lost time of miscommunication with a client,” says Tysowsky.

Among the studio's favorite features in Frankie are the real-time markup tool and the ability to export notes into a PDF file. Additionally, being able to see when a client has logged into the session -- whether before or during the conference call -- has been a helpful function.

But the biggest benefit proved to be bringing everyone together and allowing them to feel like they have a say. “Frankie's unique real-time viewing and annotation tools allow us to successfully communicate both our vision and our process to our clients,” asserts Tysowsky. “The two-way control of the playback and tools gives everyone a sense of empowerment, and allowed us to collaborate completely in sync.”

Hinge Digital now has 12 people using Frankie daily for reviews across all sorts of projects. Tysowsky finds that its web-based reviews, accessibility and easy approach to remote collaboration make Frankie the perfect tool for Hinge Digital’s style of work. “Frankie is specific to our needs and client needs,” he explains. “There are a lot of tools out there, but Frankie combines all the good things out in the market and rolls it into one cohesive package.”