Pesky announces that France Television is the latest broadcaster to pre-buy the new animated series Boj, set to premiere later this year. 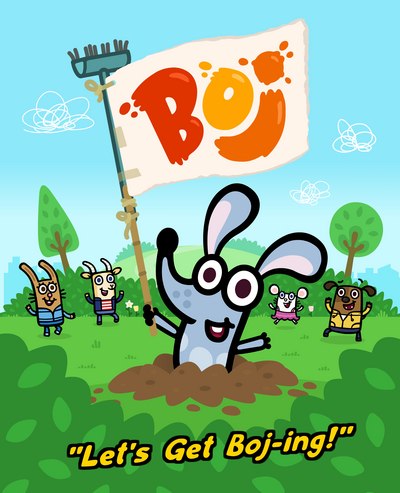 Award winning UK animation studio Pesky announced that its new 52X11' animation series Boj has been pre-bought by France Television for launch on the Zouzous preschool block on France 5 later this year. This is the latest broadcaster to join the growing list of major international channels which have signed up for the new series, including CBeebies in the UK, Sprout in the US, the ABC in Australia, RTE Ireland, S4C Wales, YLE Finland and Yoopa in French speaking Canada.

Creative and resourceful Boj pops up in his new neighbourhood and shows his new friends a different way of looking at life’s little problems. The friends’ different character types provide plenty of humour and reflect children making their first friendships outside their families.

Bafta winning studio Pesky (The Amazing Adrenalini Brothers) have joined with acclaimed pre-school writer Dave Ingham (Charlie and Lola, Timmy Time, Fireman Sam, Bob the Builder and Fifi and the Flowertots) to create the new series which will premiere on CBeebies this summer. It is co-produced with Kavaleer in Ireland and Cloth Cat in Wales.

Jason Donovan sings the theme song and voices one of the characters. Also on-board is Mick Cooke from Belle and Sebastian who will write 12 original songs for the series.

The deal with France Television has been brokered by Estelle Lafoy of Happy Audience, while Union Media has been appointed as the international distributor for all other territories.

Claire Heinrich, Head of France Televisions Youth Acquisitions said, "We are delighted to welcome this fresh and charming series on our Zouzous preschool block on France 5. We were seduced by Boj's out of the box and positive way of thinking and solving problems, as well as by the representation of different types of family characters. A good first approach to tolerance and awareness of others differences, habits and values!"

David Hodgson, Director, Pesky, said, "It's wonderful to have a channel of France5's obvious quality joining our Boj family of high-calibre broadcasters. Wherever he burrows Boj makes great friends and he is sure to find lots of new buddies when he pops up on France Television later this year!"