Framestore Ventures and American Zoetrope launch fundraising campaign for the creation of a psychological horror role-playing game based on the classic 1979 film directed by Francis Ford Coppola. 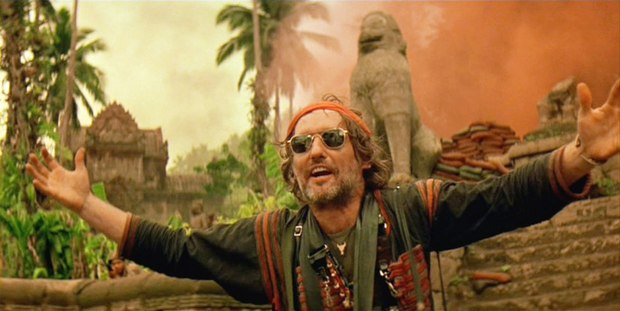 LOS ANGELES -- American Zoetrope has teamed with entertainment and games industry veterans to develop a psychological horror role-playing game based on Francis Coppola’s 1979 cinematic icon, Apocalypse Now. To maintain creative freedom and match the creative vision and artistic integrity of the film, American Zoetrope is inviting the global community of fans of the film and gamers to make the game possible via Kickstarter. The Kickstarter page is now live, with a massive array of rewards, along with a special message from Coppola himself.

“Forty years ago, I set out to make a personal art picture that could hopefully influence generations of viewers for years to come,” the director says. “Today, I’m joined by new daredevils, a team who want to make an interactive version of Apocalypse Now, where you are Captain Benjamin Willard amidst the harsh backdrop of the Vietnam War. I’ve been watching videogames grow into a meaningful way to tell stories, and I’m excited to explore the possibilities for Apocalypse Now for a new platform and a new generation.”

The Kickstarter crowdfunding campaign will be the first step in a three-year journey to give life to an interactive Apocalypse Now experience that accurately captures the tone, themes, and characters of the original motion picture. Apocalypse Now aims to blend a cinematic narrative with role-playing game mechanics set in the midst of the Vietnam War. As in the film, players will take on the role of Captain Willard, on a secret mission to assassinate renegade Colonel Kurtz. Throughout the course of the game, players will have the ability to make their own decisions independent of the original narrative. As players navigate the unspeakable horrors of the Vietnam War, their reactions to each situation will result in consequences that will alter their journey as the story unfolds. Every decision matters, and each player will tell their own story.

"We will create a game that challenges what an interactive experience can be; just as the original motion picture challenged the concept of cinema," said Montgomery Markland, game director. "We are making a game that we are excited to play. We will deliver a greater variety of experience and interaction than is currently available within the relatively static industry."

Apocalypse Now is being developed by a new team of game industry leaders, in conjunction with American Zoetrope. The team includes: Rob Auten, a lead writer on multiple billion-dollar gaming franchises including Gears of War, Battlefield, and Far Cry; Lawrence Liberty, whose executive producer and director credits include Fallout: New Vegas, The Witcher, and DC Universe Online; Montgomery Markland, who was the lead producer on two of the most successful crowdfunding titles of all time:Wasteland 2 and Torment: Tides of Numenera; in a special advisory capacity, Obsidian Entertainment’s Design Director Josh Sawyer, who directed Fallout: New Vegas and Pillars of Eternity, and many more game luminaries to come.

American Zoetrope is delivering an incredible array of material for early backers of the project, from unique game options to props from the actual motion picture, such as the Lt. Col. Wm. Kilgore “Airmobile” surfboard and Col. Kilgore’s death cards, “not a jack in the whole bunch.” Among the rewards is early access to pre-release versions of the game, limited edition Apocalypse Now-themed merchandise, and play sessions with the development team. A select tier of backers will have the opportunity to give critical feedback directly to the development team, and even take a journey on one of the Family Coppola Hideaway Adventure packages, along with a few surprise rewards that will be announced later.

Apocalypse Now is estimated to launch in 2020, with early access coming in 2019 to correspond with the 40th anniversary of the motion picture’s original release.