Framestore Swings into the Jungle for ‘Legend of Tarzan’ 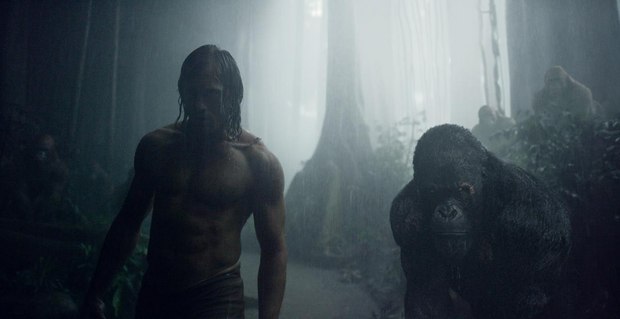 Swinging into cinemas worldwide this July, The Legend of Tarzan is the visually stunning feature film based on Edgar Rice Burroughs’ bestselling 1912 novel, Tarzan of the Apes.

Framestore was awarded more than 700 shots on the film, the work spanning complex jungle environments, digi-double creation, and intricate creature animation. Working with longtime collaborators Director David Yates and VFX Supervisor Tim Burke, the Framestore team jumped at the chance to work on this technically innovative and creatively compelling project. The story of an orphaned son of a shipwrecked English nobleman, born into the jungles of Africa and raised by apes, it stars Alexander Skarsgård, Samuel L. Jackson, Christoph Waltz and Margot Robbie.

The first creative challenge for Framestore lay in the conception of a photoreal jungle backdrop. The filmmakers had already designed elaborate sets at Leavesden studios, representing African settlements and villages, and built jungle environments backed by bluescreens on three soundstages. Framestore used these plates to inform their design decisions when it came to building out the jungle, but also referenced environments found in Gabon, West Africa; the team built a library of roughly 7,000 indigenous plant species to use.

“We freaked out a little bit at the sheer number of species required,” says VFX supervisor Alec Pejic. “Even so, the Leavesden footage was really helpful for all of our jungle visual references. We could replicate exact shots of the jungle in full CG, and it allowed us to get really creative to make it that much better.”

Arguably, the real stars of the film are the fully CG animated apes, who interact seamlessly with the actors. Yates wanted to stay close to the original story and conjure Burroughs' fictional Mangani ape; his production team developed a full-scale Mangani head and shoulders model for Framestore to reference. The team were then tasked with the creation of the three lead Mangani -- Tarzan’s adoptive mother, Kala, her son, Akut, and a fierce alpha male, Kerchak. Using the reference of gorilla anatomy, the team needed to be creative with the overall modelling of the Mangani, as they proved to be less furry and more muscular than real gorillas, with their skins much more exposed.

Framestore’s Kevin Spruce, Animation Supervisor, headed up the creation of the apes throughout the project: “It was a very daunting concept at the beginning,” he remarks. “Our apes were interacting with live characters, so it was a huge undertaking.”

The team looked at many references, studying footage of gorillas and apes and even visiting a zoo to give authenticity to what they were working on, recognizing that the animals used their whole bodies to communicate in the wild. The Framestore animation team worked hard to emulate this, but also paid attention to the eyes to convey a spectrum of emotion.

“Yates had a mandate about keeping the emotion very subtle,” Spruce recounts. “It was all about the eyes, and seeing the soul there’, adds Kevin. ‘For the animation we really felt as though we had to scale a lot back, and create the emotion through the subtle movements of the eyebrows or mouth.” To achieve the high-level of texture and movement to the apes’ fur and skin, Framestore’s R&D team developed the new “Flex & Flesh” digital tool to simulate the loosening and tensing of muscles, and a library of facial shapes, hair filter and dynamic hair systems. Creature artists then created 15 Mangani characters by varying fur color, length and density, and alternating patches of grey and bald spots. The team were further tested when Tarzan encounters a group of Mangani apes in the rain, the apes’ fur stretching and moving according to each animal’s weight and muscle mass. The Montréal team worked to calculate the fur moving alongside the body movement dynamics, and had to consider how that affected the rain itself as it hit the fur.

Jane (Margot Robbie) is captured by Tarzan’s nemesis Rom (Christoph Waltz), which means that Tarzan (Alexander Skarsgård) and Captain Williams (Samuel L. Jackson) go on a hunt for them in the depths of the jungle. Here they encounter more animals, including a herd of West African elephants.

“We played a lot with the style and speed of the elephants,” Spruce says. “We ended up making them walk unnaturally slowly as a test, and when it was placed in the shot, it just worked. It needed to have that ethereal quality.” The iconic sequence of Tarzan swinging through the jungle offered another challenge for Framestore; how could the team emulate the speed and movement required for the scene? This was also made difficult with the change in environment and lighting, as the scene transitions from bright, sun-filled light to a dark environment with heavy rain. To add further complexity to the shot, the team was required to make the action slow-motion. It was decided that Tarzan would be fully animated with a digi-double -- although that also meant that there was nowhere to hide. The end product, quite simply, had to be perfect.

In all adaptations of the Tarzan story, one thing remains: he is both graceful and strong. The filmmakers turned to Framestore’s VFX Supervisor Andy Kind to help develop the authenticity of the action required in this iconic scene. To better understand how the body moves when swinging at a similar height and speed, the team studied numerous ballet and circus performers. After a round of previs, which showed the exact movements Tarzan would make in the scene, the team set up a complicated array of 16 RED cameras to capture Alex Skarsgård’s performance so that they could rebuild the geometry per frame. The artists were then able to enhance what had already been filmed on the plate, either by replacing Alex’s legs or extending the shot where needed.

The Legend of Tarzan was littered with technical challenges for the artists, but the final product, complete with stunning jungle and captivating Mangani apes, is a film with real heart. Armed with a vast dramatic vision, David Yates was ‘extremely happy with the end product’, leading Framestore to reunite with David Yates and Tim Burke on Fantastic Beasts and Where to Find Them, in cinemas on November 19, 2016.