To create a vibrant retro mood for the futuristic sci-fi series, creative director Sharon Lock used After Effects and Cinema 4D, with live-action and hand-painted elements, to complement the production team's vision and visual language. 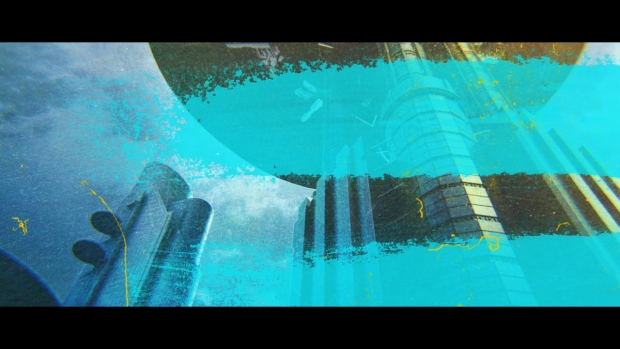 Creative studio Framestore was tasked with creating the logo and titles for the Sky Original drama Intergalactic – a punchy new futuristic sci-fi series on Sky and NOW TV. The studio’s creative director Sharon Lock collaborated with writer Julie Gearey, director Kieron Hawkes and Tiger Aspect Productions on the project. Created by Gearey, the show follows a group of female prisoners who go on the run.

“We really wanted something modern and colorful for the title sequence, that had a retro film feel to it, and also gently touched on some narrative elements of the show,” shared Hawkes. “Sharon and the team understood immediately. The finished sequence was even more than I’d hoped for. Framestore brought the concept to life brilliantly, enhancing the original vision with style and energy. I had such a great experience with them.”

The series revolves around young cop and galactic pilot, Ash Harper, who has been framed for a treasonous crime and banished to a distant prison colony. In transit, Ash’s fellow convicts rebel and seize control of their prison transfer ship. With the flight crew dead, mob leader Tula Quik is determined to reach the free world, and as a pilot Ash is forced to join the mob on their treacherous voyage.

Lock initially pitched the logo before being selected to create the titles for the series. To do so, her work needed to capture the human drama and tense relationships between the women convicts. Taking inspiration from the third wave of feminism in the 90s and punk-rock, she began the process of creating the series’ logo by profiling handmade fanzines and similar references.

She came up with about sixty different ideas to present to Gearey and the production team who recognized that Lock had an instinct for the show's complex female characters. Using a bright yellow palette with the futuristic turquoise and yellow prison outfits of the incarcerated, and by disregarding the cliched masculine shiny silvers, Lock was in alignment with the show's identity and energy.

“Even though it was set in space, Intergalactic was vibrant - the set design and costumes were very colorful so the unconventional yellow which went against that traditional sci-fi type of look suited the ethos of the show,” shared Lock. “The title sequence needed to do a lot of heavy lifting and communicate a backstory which would be out of view in the series itself.” The series is set in the 24th century in a fictitious New London. The city is built above the original capital city now swamped by rising sea level brought on by global warming and the destruction of global habitats.

The logo needed to be abstract with a graphic feel with bright colors, a scruffy punk-aesthetic, and the impenetrable attitude of the lawless and intimidating inmates. As with the logo, Lock’s palette for the title sequence complemented the team's vision and the visual language of the show.

Working in tandem with After Effects and Cinema 4D, Lock incorporated live-action footage with hand-painted elements which were scanned and used as overlays. Her team also created digital matte paintings and CG builds to incorporated iconic London building assets, courtesy of Milk VFX, who were working on the visual effects for the show.

The credits were a simplified version of the main logo design, all in yellow and timed with no overlaps between the name cards. To mimic a feeling of claustrophobia, each title stayed in the same place on the screen to communicate the women’s feelings of restraint, of being held in a confined space and unable to be alone.