Photorealistic cat sows trail of destruction in episodes of the network’s hit crime drama; one gruesome scene was completed with a CG human leg and added gory details using Houdini, with final compositing in Nuke. 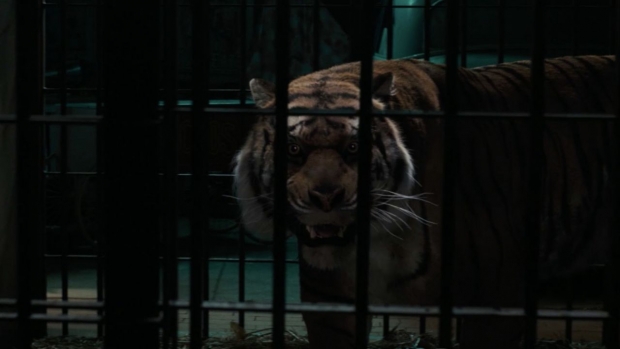 For episodes 505 and 506, the studio’s creative team was tasked with creating a killer tiger in CG, along with its trail of destruction. Introduced at the end of episode 505, the menacing cat is confined to its cage. In the next following episode, the tension builds to a climax when the tiger paces back and forth before viciously ripping off the leg of one of the show’s characters.

To create this gruesome scene, the team pushed the boundaries of the photoreal quality generally found in an episodic project. They began with creating muscle simulations of the animal, an intensively detailed groom followed in Houdini, in addition to a highly specific rig which helped to elevate the visuals using Mudbox and Maya.

“With a show like Snowfall that doesn’t generally employ a lot of CG, it was important for us to ensure that the animal was of photoreal quality so that the audience stayed within the storyline without noticing any effects,” explained Framestore VFX supervisor, Thomas Montminy Brodeur. “Our brief was for the tiger to be impressive and intimidating, without ever looking unrealistic. We knew we were on the right track when the showrunner Dave Andron and director Kevin Rodney Sullivan said it looked ‘terrifying’!”

Furthering its realistic nature, CG artists added dry grass and imperfections to the tiger to create the sense of tangible interactions with its environment. They then built a CG human leg that the tiger attacks, adding blood spatters on the tiger, leg, and ground in Houdini, with final compositing in Nuke.

Season 5 of Snowfall is now live on FX.