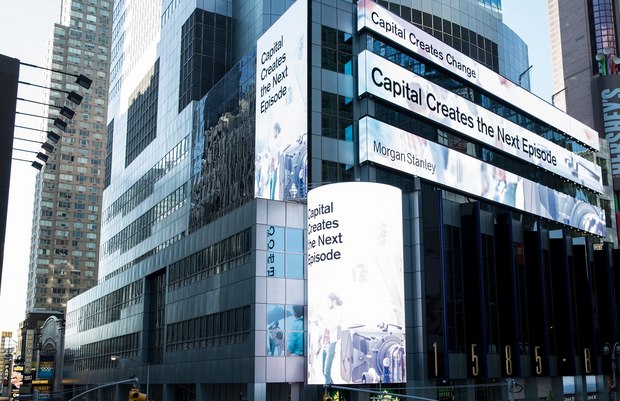 Few locations in the world offer the eminence of New York’s Times Square. Famous for its blocks of dazzling LED advertising, the opportunity to refresh the displays at Morgan Stanley’s headquarters was an exciting challenge for Framestore’s Labs team, led by Director Robin Carlisle and Producer Jonny Dixon. “Morgan Stanley was looking for a creative partner to work alongside Bloomberg to deliver something new for their LED screens,” says Dixon. “Their previous set-up had been in place for over 20 years, and although the amber ticker was well-known, the technology didn’t allow them to deliver fresh and compelling content. In Times Square especially, there is a need to stay fresh and relevant.”

It was Labs’ work on the Stellar Atrium Project for London Stock Exchange that caught the client’s eye, and gave Framestore an edge over traditional billboard content providers. Previous projects also include work for BA, and an installation for London’s Tate, sponsored by Bloomberg. “We knew we had to offer something innovative,” director Robin Carlisle commented about the brief. “The financial sector is an interesting area for us, because, on the face of it, these are not traditionally creative companies. We found that Morgan Stanley were very open to ideas and were very clear on what the company stands for.”

The team built a custom hardware system that allows Morgan Stanley’s marketers and Bloomberg’s internal creative agency to efficiently create content, to display in Framestore designed templates and graphics, combined with various data inputs and visualizations. In essence, something new for LED displays of this kind, “The feeds, the data input, additional inputs via a CMS -- these were simply not possible with the older systems, “says Dixon. “We’re moving more into content creation here, integrating corporate videos with dynamic content driven by real-time data.”

Morgan Stanley, working at the center of global financial markets, wanted the ability to display updated data at all times. “The ease of access to interface with the system is key,” commented Dixon. The Commodities visualizations, in particular, demonstrate the progression from amber ticker to dynamic content system. Kicking off with oil, gold and corn, the screens will show price fluctuations for tangible goods, bringing the meaning of the markets to a wider audience.

Dixon adds, “The space is unusual with seven screens, of different aspect ratios and resolutions. The Labs team worked closely with Bloomberg’s creative team to maximize use of the format. Previously, the only home for this type of content would have been website. Now, it’s got a new stage.”

This launch marks the beginning of an ongoing workflow between Framestore, Morgan Stanley and Bloomberg, who will continue to work closely together to mold and adapt the content used on the LED screens. “We’re excited to hand over the content management reins to Morgan Stanley, whilst continuing to work on ideas and updates for the current graphics,” says Dixon. “The joy of a project like this is that it’s inherently adaptable; we’ll be working to keep the content as innovative as possible.”