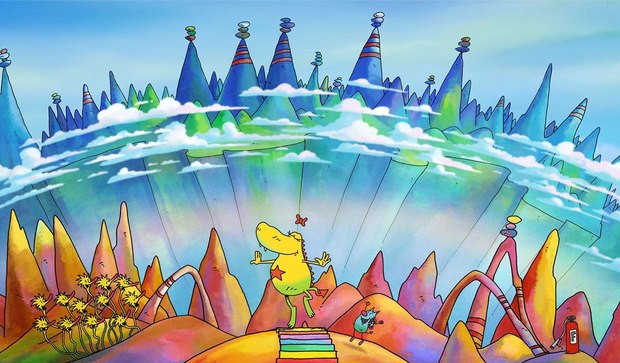 Framed Film Festival -- the annual showcase of the best new children’s films -- returns to the Barbican this month with stories of adventure, animals and magic! The program includes a special preview of the new Ellie Fanning-voiced feature Ballerina, the London premiere of a tale of sibling rivalry, Molly Monster, plus a specially curated festival shorts program featuring the best new animated shorts from around the world. Together with free activities and workshops accompanying the screenings, this weekend is a must for all young film fans.

A young orphan girl Félicie (Elle Fanning) travels to Paris in the hopes of fulfilling her dreams of becoming a ballerina. Having passed as someone else to acquire a position at the prestigious Grand Opera House she meets Victor (Dane DeHaan), a boy who dreams of becoming an inventor. The two embark on crazy mishaps and grow closer as Victor encourages Félicie to defy her odds by living her dreams and never giving up.

This specially curated program of the best new shorts from around the world will delight young and old alike. From the tale of a mushroom who has lost his hat, to a little mouse that just might be the most wonderful house guest around, you’ll love dipping into these fantastic stories in bite-size form.

Bodi lives with his father in the mountains and helps to protect their flock of sheep by day, but by night he dreams of being a musician. When a radio mysteriously falls from the sky, Bodi decides to leave home for the big city and musical stardom. However, the city isn’t quite how he imagined and he soon finds himself caught up in an adventure that may just lead all the way back home. Featuring the incredible voice talents of Edie Izzard, Luke Wilson and J. K. Simmons, this tale of a dog with a dream is not to be missed.

With a new brother on the way, Molly Monster is suddenly not her parents’ only child, and together with her best friend Edison she sets out on her own to find her new place in the family. The journey takes her all the way to Egg Island, where her parents have ventured to hatch the egg, and there she is reunited with both her parents and her new sibling. Molly Monster, receiving its London premiere at Framed Film Festival, is a tale for young children about being a new sibling and discovering yourself.

Raven is a little bird with a big passion for racing. Loving nothing more than racing around in his homemade pedal car, Raven repeatedly gets himself into trouble by ignoring his chores in favour of a quick race around the forest. This soon leads to chaos when Raven crashes into a shed filled with food for the winter, destroying the supplies. After discovering there’s a big race with an even bigger prize waiting at the finish line, can Raven win the race and replenish the harvest before it’s too late?

The Big Cheese, a traditional race in Louis the Magpie’s town Flåklypa, and this year he is determined to enter. With his best friends Luca the Hedgehog and Alife the inventor, Louis is so confident that they will secure the win that he secretly bets on their victory with the opposing town Slidre, placing both his house and Alife’s workshop against his opponent Clapton’s cheese factory. However, when Clapton brings his own team, who don’t seem to play by the rulebook, Louis suddenly realises that winning is not going to be as straightforward as he first thought. A hilarious journey of rivalry, friendship and the danger of overconfidence!

In Norwegian with English subtitles (subtitles read aloud in English via headphones).

There will be free film activities and workshops in the foyer all day. These events are drop-in or sign up on the day.

Create Your Own GIF
Free. Sign up on the day. All ages welcome

Experience the wonder of the Magic Lantern. Artists Nicole Mollett and Frog Morris of Art of the Magic Lantern use old-fashioned pre-cinema projectors to conjure up fantastic visions and tell tall tales. Watch a short show using Victorian photographic slides and earlier hand painted slides then create your own story to tell and make your own slides in the workshop afterwards.

Join in with drop-in games and making activities with Tea Dance for Little People that invite young children and their families to engage with each other and the space around them in exciting and fun ways -- bringing the films in the festival alive.