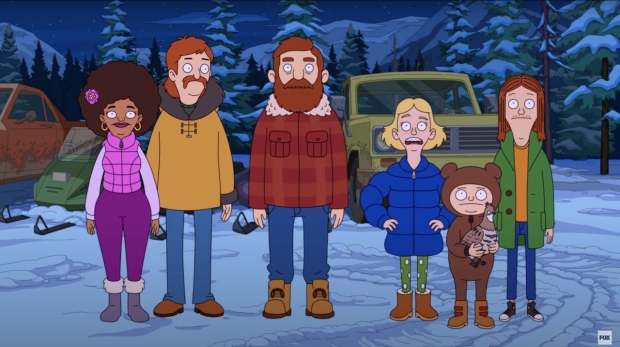 FOX is airing a special preview episode of The Great North, the animated comedy series from Loren Bouchard, Wendy Molyneux, and Molyneux-Logelin (the genius minds behind Bob’s Burgers), on January 3; the show premieres at 8:30-9:00 PM ET/PT followed by a brand-new episode of The Simpsons at a special time: 9:00-9:30 PM ET/PT.

The Great North’s special preview gives viewers a look at the new show ahead of its series premiere as part of the Animation Domination lineup on Sunday, February 14 (8:30-9:00 PM ET/PT). The series follows the Alaskan adventures of the Tobin family; as a single dad, Beef (Nick Offerman, Parks and Recreation, Making It), does his best to keep his bunch of kids close – especially his only daughter, Judy (Jenny Slate, Bob’s Burgers), whose artistic dreams lead her away from the family fishing boat and into the glamorous world of the local mall. Rounding out the family are Judy’s older brother, Wolf (Will Forte, The Last Man on Earth); his fiancé, Honeybee (Dulcé Sloan, The Daily Show); Judy’s middle brother, Ham (Paul Rust, Love); and ten-year-old-going-on-fifty little brother, Moon (Aparna Nancherla, A Simple Favor). While the children’s mother is not in the picture, Judy seeks guidance from her new boss, Alyson (Megan Mullally, Will & Grace), and her imaginary friend, Alanis Morissette (guest-voicing as herself), who appears to her in the Northern Lights.

The series, which has already been renewed for a second season, was created, written and executive-produced by Bob’s Burgers’ writers and executive producers Wendy Molyneux and Lizzie Molyneux-Logelin, as well as writer Minty Lewis (Regular Show). The Molyneux sisters serve as showrunners. Bob’s Burgers creator Loren Bouchard is also an executive producer. The Great North is a 20th Television production, and animation is produced through Bento Box Entertainment.

On an all-new The Simpsons, Dan Aykroyd (Ghostbusters franchise) and Bob Balaban (The Politician) guest-voice in the “The Dad-Feelings Limited” episode, in which the awesome origin story of Comic Book Guy (Hank Azaria) is revealed, as he and his wife, Kumiko (Jenny Yokobori), debate having a baby.  The longest-running primetime scripted show in television history, The Simpsons burst into popular culture in 1990 and has remained one of the most groundbreaking and innovative entertainment franchises, recognizable throughout the world, with Homer (Dan Castellaneta); Marge (Julie Kavner); Bart (Nancy Cartwright); Lisa (Yeardley Smith); and Maggie the epitome of TV icons. Rounding out this cast of characters are many beloved Springfield residents, including tavern proprietor Moe Szyslak (Azaria) and nuclear power plant owner Mr. Burns (Harry Shearer). The Award-winning animated comedy will celebrate a landmark 700 episodes this spring. The Simpsons is a Gracie Films Production in association with 20th Television. James L. Brooks, Matt Groening and Al Jean are the executive producers. The Gracie Films Worldwide Brand Division develops and produces the licensed content for the series.