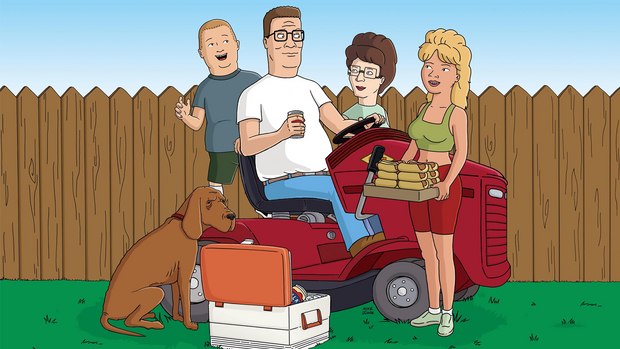 King of the Hill, the animated series created by Greg Daniels and Mike Judge celebrating Middle America, might be in for a revival, according to a report by The Hollywood Reporter.

The news was revealed at the Television Critics Association’s summer press tour currently underway by Fox Television Group chairman and CEO Dana Walden, who said the network has had “preliminary conversations” with Daniels and Judge about a possible return of the Arlen, TX-based Hill Family:

“We had a very preliminary conversation given what’s going on in the country; they had a point of view about how those characters would respond. But again, it was one meeting and I hope to revisit it. The meeting was probably two and a half months ago. They’re both very busy and it was really just a first exploratory, ‘Are you excited about this? Is there potential in that future?’ And they were both excited about it, but they’re working on a lot of different things individually, so it’s about finding time.”

Running for 13 seasons from 1997-2009 with more than 250 episodes, King of the Hill incorporated Judge’s political humor, touching on the everyday lives of the series’ much-beloved characters. (Full disclosure: Bobby Hill *might* be my spirit animal.)

Regarding the future of animation at FOX, Walden said there are five or six other projects in the works, but cautioned that adding them to the Sunday night lineup with network mainstays Family Guy and The Simpsons would be challenging.

“We are not ready to discuss it yet,” Walden said. “We have five or six things in development right now that I’m excited about. … It’s hard to live up to that block and those shows right now are so iconic, they’re so connected to our brand. It’s hard to just slide an animated show into that lineup and have people have the same goodwill that they have for a show that’s been on for almost 30 seasons now.”

Only time will tell if the proposed revival makes it to the development stage. King of the Hill fans will be watching, I tell you whut.