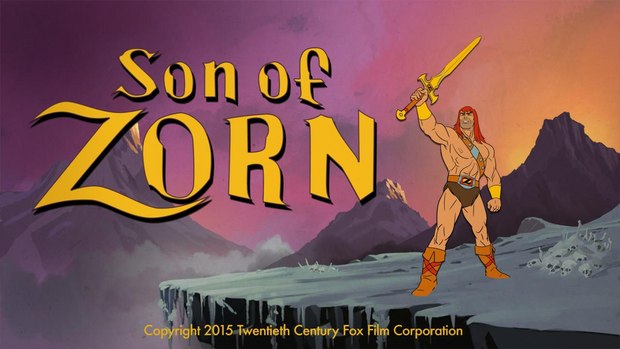 The new FOX comedy Son of Zorn will preview on Sunday, September 11 (8:00-8:30 PM ET/PT). The series will then premiere in its regular time period with an all-new episode Sunday, September 25 (8:30-9:00 PM ET/PT). Son of Zorn is a new hybrid live-action/animated comedy about a warrior from a faraway island in the Pacific Ocean, where everything and everyone is animated, who returns to Orange County, CA, to win back his live-action ex-wife and teenage son.

From executive producers Phil Lord and Christopher Miller (The LEGO Movie, 21 Jump Street), Son of Zorn features the voice of Jason Sudeikis (The Last Man On Earth, Horrible Bosses, We’re the Millers). In the series’ special preview episode, “Return to Orange County,” Zorn (Sudeikis) travels from his native land of Zephyria to California to visit his son, Alangulon, aka Alan (Johnny Pemberton, 21 Jump Street). While there, he learns that his ex-wife, Edie (Cheryl Hines, Curb Your Enthusiasm), has a fiancé (Tim Meadows, Saturday Night Live). But to reconnect with his son, Zorn stays and obtains a job where, despite his “unique” qualities, he is welcomed by his new boss (Artemis Pebdani, Scandal, It’s Always Sunny in Philadelphia).

In the all-new series premiere episode, “Defender of Teen Love,” Zorn rediscovers the mystical “Stone of Sight” in an old box and uses it to help Alan get closer to his crush, Nancy. Meanwhile, Edie tells Zorn to move his boxes out of her garage and into his apartment.